A Finnish adventure park with a rabbit factor

Ah the King of Finnish quirky crime is here and he’s got a rabbit with him, a Komodo dragon and a cat by the name of Schopenhauer. It’s a crime novel, set in an adventure park close to Helsinki. Now, with a premise and characters like that, what more could you ask for? 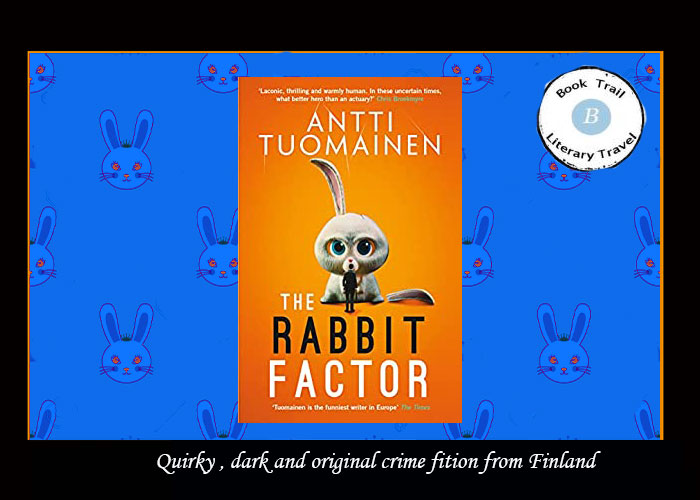 Destination : Helsinki and a fictional adventure park there

Food and drink to accompany: Burger and chips that you buy from an adventure park

I never thought I would read a novel set in an adventure park featuring a giant plastic rabbit. A crime novel no less. Would this work? What a strange mix! Well, yes, in the hands of anyone other than Finnish writer Antii Tuomainen!

This man is quirky, wears the best shirts in the book business and always has that cheeky smirk on his face. Luckily that all comes through loud and clear in this novel. It’s dark and serious too but ultimately quirky and fascinating. That cover is bound to attract readers even before the plot comes into play!

The setting of the novel is perhaps the quirkiest thing about the whole thing It’s set in an adventure park that must never be described as an amusement park whatever you do!  You get to explore a little around Helsinki too but the city is a mere backdrop to the shenanigans that are going on inside that park!

The smart thing about this book is that it seems to be one thing and then it takes on a life of its own. Think of a gremlin when someone feeds it after midnight! It’s a novel about someone who works in risk and uncertainty as an actuary, inherits an adventure park and then becomes involved with the mafia. Oh and it’s called YouMeFun and contains a huge plastic rabbit.

The plot is one thing,  but it’s the fresh take on things, the originality of the whole thing and  the deliciously drawn characters who really shine. Sorry, I forgot the cat Schopenhauer- he was a delight!