Meet the author Tan Twan Eng came to Waterstones recently to showcase his amazing novels set in Malaysia and Asia . His books have been shortlisted for the Man Book Prize 2012 and won the Man Asian Literary Prize 2012. 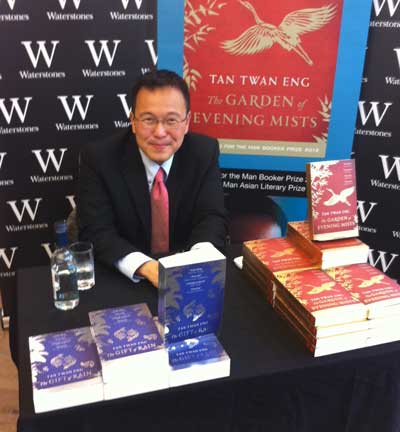 The Garden of Evening Mists is a rare book – that which is so different to anything else I’ve ever read but one which touches so many different emotions that you never forget it. And now here I was about to meet the man who had written such beautiful and yet heart wrenching prose.

The story is narrated by Supreme Court Judge Teoh Yun Ling, who is the sole survivor of a brutal wartime camp during the Japanese occupation ofMalaysia

She suffers from an illness that will soon affect her ability to communicate.

My memories will be like a sandbar, cut off from the shore by the incoming tide. For what is a person without memories?
And so we go with her as she attempts to reclaim those memories and to see what she has gone through in her past.

It was thanks to an exquisite Japanese garden in Kyoto that she managed, in some way to numb the horrors of the war. After wards, Yun Ling seeks out Yugiri (the Garden of Forgetfulness or Evening Mists?), created by the exiled gardener of the Emperor of Japan. She becomes his apprentice and the develop a tight kinship.

Tan Twan Eng plants and nurtures his garden with beautiful, delicate prose and tends to it gently throughout the book, nurturing the images it represents. In this sense it is certainly representative of life itself and indeed as Tan Twan Eng describes the garden:

Tan Twan Eng was a pleasure to meet. He was warm and friendly and sat and chatted with me for a little while. He signed both books and I asked him about them and about his current book tour. I told him I had always wanted to travel to Malaysia and to the Far East in general and that he had certainly inspired me to do so. I got an insight into what made him write this book, what he believed in and the kind of person he was and I cam away feeling I had really met someone special with an extra special story to tell.

I am saving the second book The Gift of Rain for a later read since I want the mist from the garden to last just a little while longer.