Histfic set in France – Guardian of Lies, Kate Furnivall – There’s some authors who don’t just transport you to a time and place but put you right at the heart of the personal trauma. You get to see, smell and feel the time and place, the issues and moral dilemmas of their day. This novel is about trust and loyalty at the heart of one rural family in France. 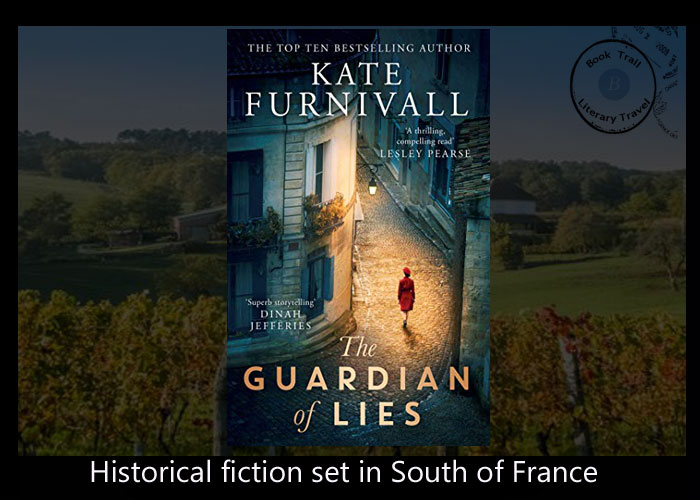 Kate Furnivall is the author you need to read if you want to immerse yourself in a time an place. This novel is set in the south of France, post-war and it’s a time of intrigue, fear and just as much danger as wartime it would seem.

The south of France is an interesting location as it’s so unexpected for a novel about Russian espionage. However that’s the Furnivall twist – a story where the setting reflects a feeling, a culture and time far away from the focus of the ‘issue’. I didn’t think about espionage between the USA and Russia affecting the inhabitants of farms in southern France! This is where the skill of an author such as Kate really weaves her words to ensure that a complex subject is treated with care and the human touch. There’s details and immersive scenes yet it’s easy to read. That takes some skill in my eyes.

The novel starts as it means to go on. In the first chapter, there’s a car chase so keep hold as you read! There’s nothing like being at the centre of the action is there!?

I’m going to skip to the farm in the south of France now for fear of giving spoilers. Would this be a more calm setting? Oh no! Civil unrest is rife in this part of the countryside.Significantly, there is an American airbase there which raises the question as to whether the community nearby should spy on the Americans. However, this very act of spying means to become intrinsically involved in the Cold War. What will the family do? Do they all agree?

Can you imagine how hard it must have been to have such a dilemma? To mistrust your family? How do you cope if someone has a stronger view than you on the other side of the argument? It’s tense and realistically told.

Grab your passport and step back into war-torn France. Immersively and beautifully written.