A haunted theatre in Hull awaits you with dust on the stage..

Ghostly tale set in a Hull theatre – I am Dust by Louise Beech – There are certain books that come along and stay with you long after you’ve read them. And I mean long after. Books that linger, have you thinking about the characters for days, weeks after. Stories that touch you in some way and have an effect on the books you read afterwards. Books that leave you with such a vivid sense of setting, being in that place is all you think about.

Now, imagine you are in the Dean Wilson Theatre in Hull (fictional but the author herself works in a theatre so…..). A play is returning to where it first opened many years ago. When it opened however, the leading actress was found murdered in her dressing room. Will anyone be brave enough to take on the seemingly cursed role? Will anyone be brave enough to even step inside the dressing room? Chloe works as a theatre usher and is intrigued by the goings on, the legends and the backstage noises. Not all the drama is about to take place on stage… 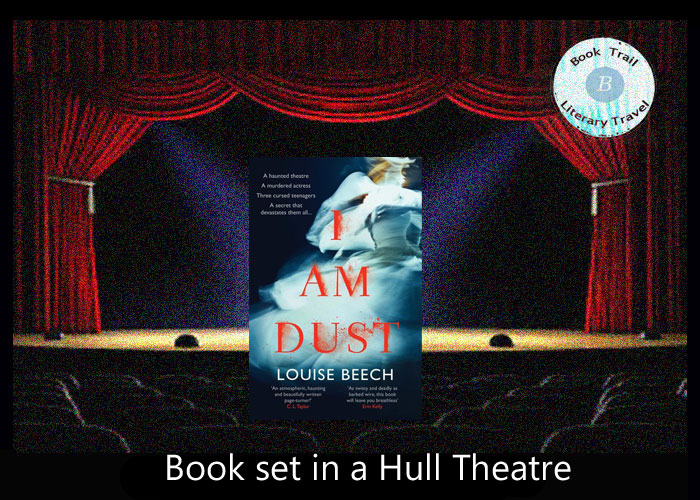 Setting: One haunted theatre in Hull

This book will give you all the tingles and more. The ethereal ghostly quality whispers at you from the very first page and makes the hairs on the back of your neck stand on edge. I was transported to a dark theatre, trapped backstage with the noises, the smell of greasepaint, the heat of the lights and the ghostly whispers of the past.

Just read this paragraph in particular and listen to your own voice:

‘I’m still here; I am dust,
I’m those fragments in the air,
the gold light dancing there,
that breeze from nowhere.’ 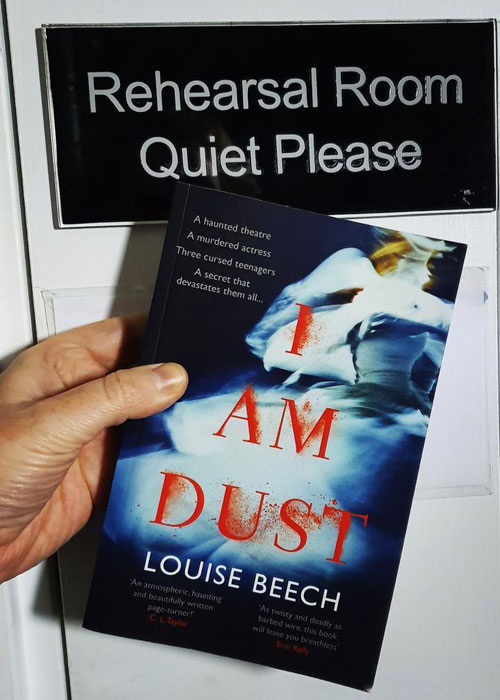 Brrr does that not just light up your reading radar and have your head buzzing with anticipation? The opening chapters were like that feeling of being in an audience, waiting for the curtain to come up, the auditorium in darkness. Cleverly, the rest of the novel is staged in two parts. Like a Shakespearean tragedy about to unravel. Modern day, and the theatre is preparing for this iconic play to return. Usher Chloe was obsessed with it when younger and she and her friend Jess would sing the words, dream of being in a play and talk constantly about the legend. However, Chloe is a different, damaged woman. She hides away herself in the theatre, literally picking up the glitter, the dust of the play that has performed and then returns home when the curtain has brought an end to the evening.

Meanwhile, stage left, the story takes us back to a time when Chloe, Jess and a boy named Ryan were friends. Three friends who tempt fate with an ouija board. A harmless teenage prank? Or something that awakens those dark shadows in the back of an empty theatre…Talk about shivers up your spine! I was literally tingling with the sense of foreboding throughout.

As the curtain closes on one act and returns to the present, you get a real sense of how the past and present collide And collide they do.Will the murder of the actress ever be solved? Will her ghost ever be laid to rest?  First we have Act one, Act two, the interval and then comes the all important epilogue…

I had an eerie orchestral score in my head for most of this. The sound of a theatre orchestra, hidden in the pit, its chilling sounds floating up and over the seats. For the finale, that ghostly curtain closed too and I was left sitting in a dusty, faded theatre, empty apart from me, the spirits of the characters and that faint music, still echoing around the auditorium.

This novel is a real theatrical experience. Highly recommended.