I love a good historical novel and especially ones based on true fact or memoirs, so when I read The Imitation Game, long before it was a film, I was spellbound. I’d heard of Alan Turing and the work he and others like him had achieved during the war, but I’d not really read much about how it was all achieved and the ordinary men and women who worked at Bletchley. I’d read fictional accounts such as The Amber Shadows by Lucy Ribchester and The Dandelion Years by Daisy James and I’d really wanted to know more. 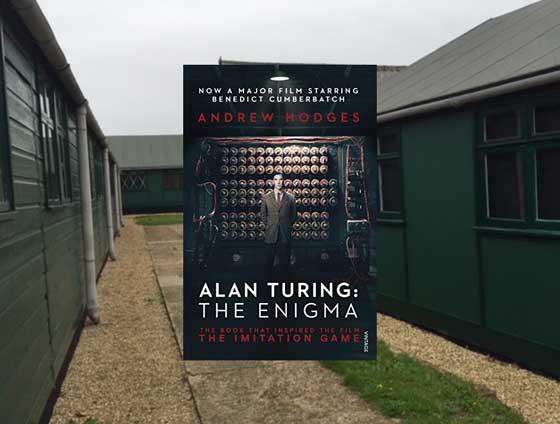 The blurb of the book:

Alan Turing was the mathematician whose cipher-cracking transformed the Second World War. Taken on by British Intelligence in 1938, as a shy young Cambridge don, he combined brilliant logic with a flair for engineering. In 1940 his machines were breaking the Enigma-enciphered messages of Nazi Germany’s air force. He then headed the penetration of the super-secure U-boat communications. ”

It was also the personal story I wanted to see, the fact that Alan Turing was treated worse than an animal for the simple fact that he was gay. Illegal at the time, despite the fact that this man had dedicated his life to his country and saved countless lives in the process, he was arrested for “gross indecency”, told he had to go through  chemical castration. Turing died in 1954, 16 days before his 42nd birthday, from cyanide poisoning. Ruled a suicide, there is so much wrong with the fact this man went through torture before he died. Suicide or not, it’s a shameful stain on our history. 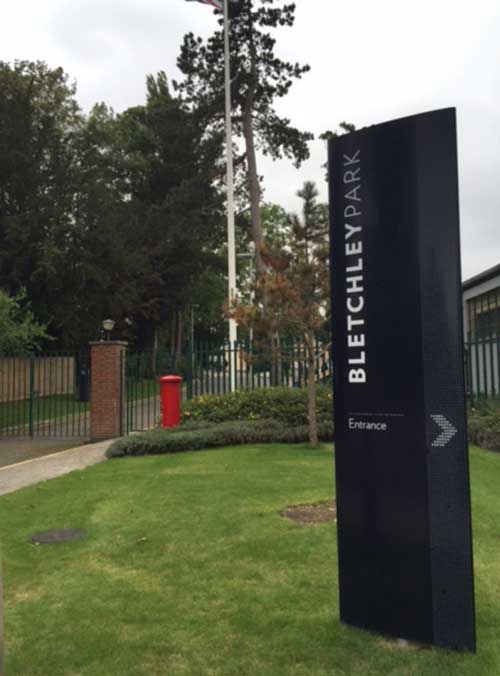 Walking into the park, I thought of how many women like me had done the same, only having come from their rooms rented nearby to work in secret, in dark huts each and every day. Mind breaking work that they couldn’t talk about, not even to many others on site, since one hut didn’t always know what the other ones were working on. Men and women often worked separately on different jobs and although there was some degree of socialization and mixing of course, the work and days here would have been very hard I imagine. 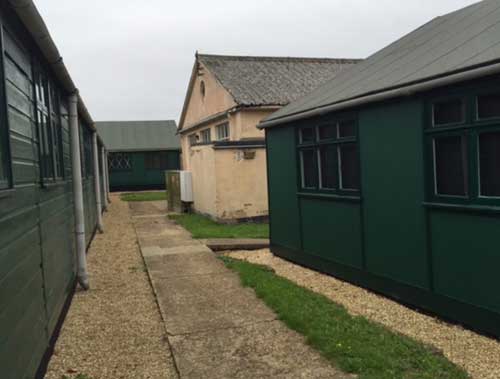 The huts at Bletchley Park (c) The BookTrail

It’s a bit like walking on hallowed ground as well walking on the site. The ghosts of the past whisper round the walls, names of those who worked here carved in the brick, books on the shelves in the offices, tin cups tied to radiators, the smell of typewriter ribbon…it’s all the little details that make this place feel so alive yet abandoned at the same time.  I managed to stand alone in a few of the rooms and the rustling of other visitors walking in the narrow corridors gave me the shivers as it was as if they were coming to work and our day was about to start… 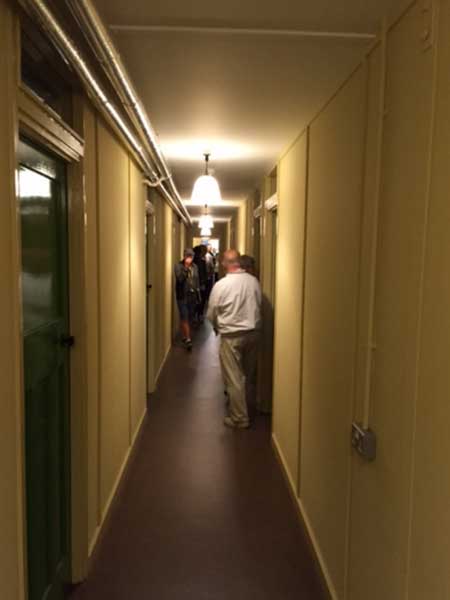 Inside the huts at Bletchley Park (c) The BookTrail

The guided tours they give to on audio are excellent as  you quite literally walk in the footsteps of those who were here. What did they eat, do, what was involved in breaking a code? Many rooms appear as if they’ve just been vacated and that was a feeling which never left me. Thrilling and nostalgic at the same time. It was really an honour to be here. 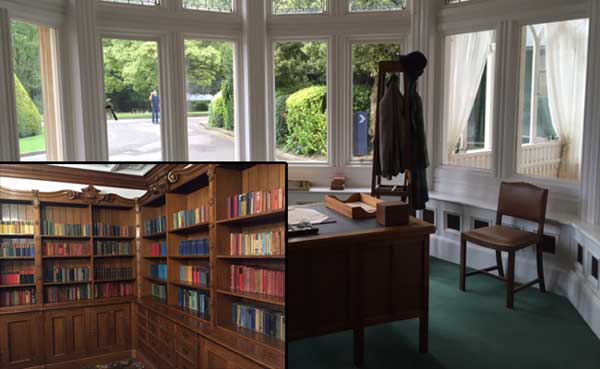 The main building as seen in the film too, was just as impressive as I thought it would be. The library inside is VERY impressive with a lovely bay window and wooden shelves, but it’s the feeling of grandeur that pervades the entire building. The bust of Winston Churchill, the geniuses who walked these hallowed halls…and the room with the Enigma machines inside… 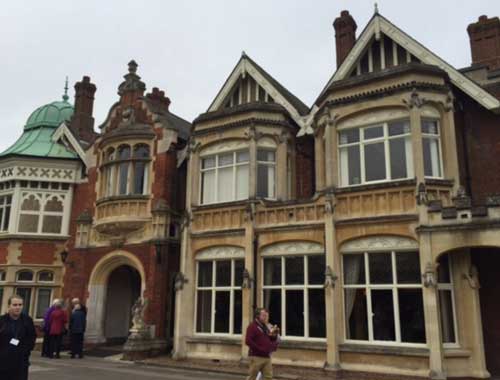 The main house at Bletchley Park (c) The BookTrail

The most moving part of the tour was of course, Alan Turing’s office. The desk was scattered with his pens, papers and writings. His umbrella, his cup tied to the radiator. Imagine the man sitting right here. That was a feeling I’ll never forget 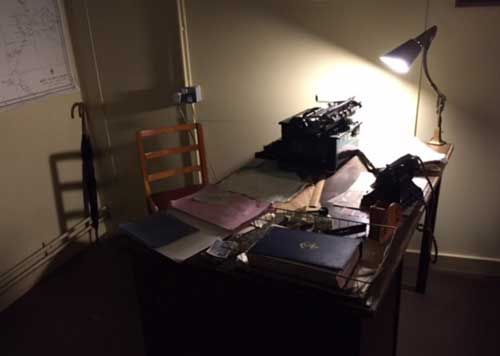 The working conditions we were told were hard and often harrowing. the huts were tiny as were the corridors inside them and the rooms. There wasn’t much space between them either. No chance of light as the windows had to be blocked up or lights dimmed due to the secrecy of the work involved. 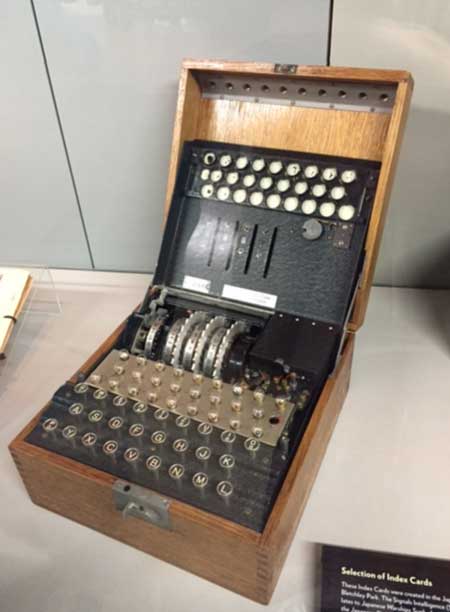 I can honestly say that this was one of the most moving and harrowing booktrails I’ve ever done as it was real, recent history. I have since seen the film too and it brings home more of what these times must have been like, but it’s nothing compared to being there, standing in front of Alan Turing’s desk and taking time to just think about what these people did. 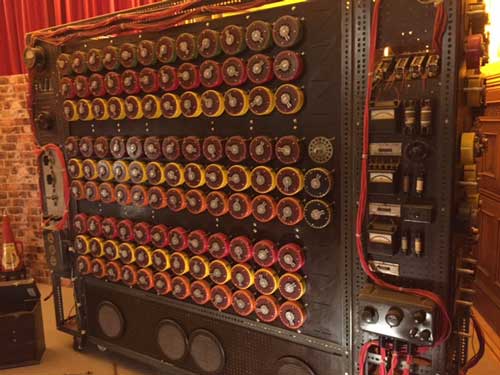 I’ve collected a few other books on the days of Bletchley Park since and can’t stop reading about the men and women of these huts. I cried at the ending of the movie when you realise what happened to Alan Turing and I did standing in his room. No one dared speak. It was such a moving experience. 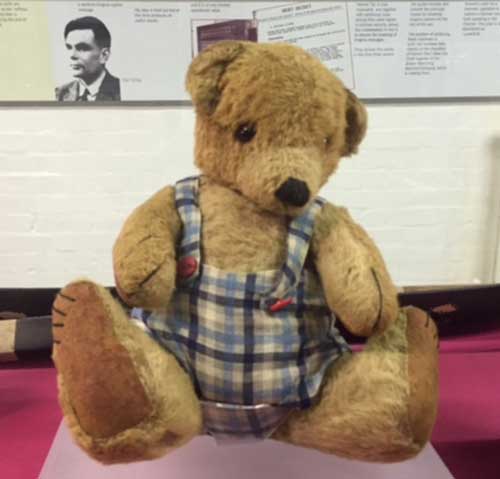 Thank you Bletchley Park and everyone who worked there

This is definitely a book to read, a film to watch and a location to visit. More books centered around these times here :  Bletchley Park