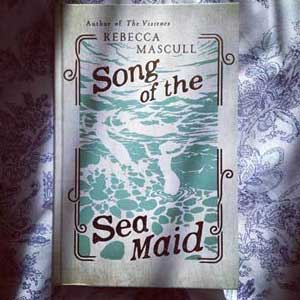 The little white rowing boat pulls up to the shore and I climb in. “This way,” the man says, “the mistress is waiting for you…” Clutching the side of the boat as I sit down, I steady myself in preparation for the journey. The man smiles “not to worry miss, I am a good driver, and the island is only a few miles that way.” He points over to the horizon where I see nothing but sea mist and hear nothing but the haunting melody of someone singing. “That will be the sea maid,” he smiles, noticing my surprise at hearing such a sound.

What a lovely way to meet Rebecca Mascull I think to myself, the author of The Song of the Sea Maid. She has invited me over to her island to speak of her novel…

She is standing there in white floating robes, a blue shimmering scarf as I step off the boat. There is tea and cake waiting. Served in shells. Very nice I think. And so begins my meeting with the Sea Maid herself..

Hi Rebecca. I have so much to ask you about your novel, Song of the Sea Maid.Let’s start with Dawnay -is she based on a real woman of her time. Can you tell us about the problems female scientists would have had all those years ago?

I would say rather that Dawnay is not based on any specific scientist, yet more that she is representative of a range of female scientists through the ages that have worked in obscurity and yet have contributed enormously to the history of science. In the C18th, despite it being the age of enlightenment, the problems facing any woman who wanted to study were considerable. First of all, it was assumed that women did not have the brain capacity of men, so what father in their right mind would waste his time and money educating daughters when there were sons to school? Some only daughters were educated – the lucky ones. Furthermore, if a woman was lucky enough to have been educated then she had the establishment to reckon with. Many scientific institutions would not allow women to attend lectures, let alone give them. Furthermore, many ideas at that time were deemed to be too controversial to publish or even speak of openly, and could be charged with treason or blasphemy. So, it was a dangerous time to voice controversial ideas about our origins. Thus, Dawnay had tremendous obstacle to overcome. My kind of story! 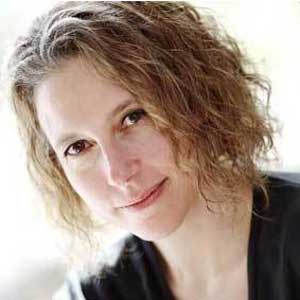 Dawnay is a very strong character. What do you admire most about her?

I think I admire her bravery most, setting out on an unknown journey on her own. I did go travelling a lot when I was younger, but not on a rickety wooden ship with the danger of shipwreck at every moment! I also admire her determination to carry on, despite the seeming impossibility of her circumstances. And, trying to avoid spoilers, I admire that she learns to change and adapt her single-mindedness to the needs of others and learns the value of human relationships, and most of all, love. She came from such a loveless background that she could have carried on that way all her life, yet I wanted her to be tested and altered in that way.

How did you research the travelling and adventure aspects and more to the point imagine them as Dawnay would have experienced them in the 18th century?

As I said, I did travel a lot when I was younger. My first journey truly alone was on a tour of Spain, Portugal and Morocco when I was 18. I went out full of gusto and on the first day the plane was delayed for hours and when we finally got to the first hotel it was in the early hours of the morning, I flushed the loo in the hotel & it wouldn’t stop flushing! It just flushed and flushed and flushed! I was so worried it was going to flood the bathroom! And I was so embarrassed I didn’t even ring down to reception and just put up with it for two hours until breakfast them hurried away and tried to pretend it hadn’t happened! So I realized that I wasn’t as brave as I thought I was and the next two weeks passed in a huge learning curve of trying to be brave and face up to things. It was very good for me and I travelled more later that year, and again in my twenties, travelling round much of Europe and beyond, to India. I had some difficult times and moments when I thought, what the heck am I doing? But there were other moments that were sublime and worth all the trouble and worry and discomfort. I wanted Dawnay to learn and suffer like that too, and understand that hard bargain every traveller must make. In her day, of course, it was a lot harder to learn that lesson! I read quite a bit about the age of sail, and a wonderful book called Female Tars, about women on ships in that age, which was full of brilliant details. I also enjoyed Henry Fielding’s account of sailing to Lisbon, which gave me most of the local details and also how terrible it is to have a bad captain on board. I loved the accounts of life aboard ship, but I don’t think it would’ve suited me then – or now!

Dawnay’s soul is described as a ‘nomadic one which cannot be cured by reading from the Arabian Nights’.  Does this describe yourself?

It did once, in my late teens and twenties. I had very itchy feet and thought I would spend my life travelling the world. But I’ve settled down a lot more since then. I still have a yearning to see some corners of the world but I also love my home comforts. To be honest, we can’t really afford to travel much with a young child and a home to run. But perhaps one day, a few city breaks in some nice hotels…Sounds good to me!

You evoke your settings extremely well and they are very vivid. Do you look at drawings as you paint them with words? How important is setting in a novel?

Thanks so much. I’ve always thought very visually when writing. Someone said of an early novel of mine (pre-publication) that it was written like a movie, and asked if I’d considered writing screenplays! I’m not sure about that though, as I love prose so much and love descriptive writing. I do have a picture wall in my study that I build up for every novel, that includes a range of images, photographs and paintings, of the period and of the specific topics involved with the novel. For example, for this novel it was C18th dress, interiors, roads etc.; ships, cabinets of curiosities, the Berlengas Islands & Menorca etc. I use maps too, to plot my characters’ steps across their environments. I think setting is crucial to me as a novelist. I love to escape in my writing and that means my characters usually do too! For me a story is usually a journey – both external and internal – that’s what I love to read and watch, and that’s what I love to write.
The stunning Berlengas Islands off the coast of Portugal, where Dawnay defies the conventions of her day and travels alone to begin her scientific investigations in situ. 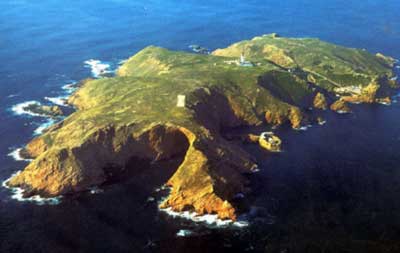 The stunning Berlengas Islands off the coast of Portugal. (c) Rebecca Mascull

When I’m writing a novel, I do make the effort to visit as many relevant places as possible – within my budget and limited free time – so with this book, I visited C18th settings such as Dr Johnson’s House and Fairfax House, Burton Constable Hall and the Coram Orphanage Museum. I take lots of photos and even make little videos to remind me of the sounds too. It helps immeasurably when I sit down to write those chapters. When I was writing THE VISITORS, I visited a hop farm and touched the new growth and felt the stalks – then I knew that the former was so soft and the latter very sticky – I don’t think I’d have found out those precise details if I’d never been there.

We finished our shell cakes and tea and before I knew it the white rowing boat had appeared at the side of the island, knocking gently at the water’s edge as if to tell me it was time to leave. Maybe for now, but I have so much more to discover with Rebecca’s novels, that I’ll be back.