Travel to The Fountain in the Forest with Tony White

Tony White is the author of the novel which moves from London to Stonehenge then across to France and a rather quaint hilltop village….it’s a story which “transforms the traditional crime narrative into something dizzyingly unique.”

Tony it’s over to you:

This Booktrail begins on the stony beach of Cagnes-sur-Mer, then goes inland – with a gently ear-popping 1,000 foot ascent – to the beautiful walled town of Vence and the forested hills that surround it. The trail ends higher up the mountains in the hilltop village of Tourettes-sur-Loup, which was fortified by Saracens a century or two before the Battle of Hastings. All are locations from The Fountain in the Forest, in whose pages the two great, bare limestone mountains towering above the towns of Vence and St Jeannet are joined by a third, the fictional Baou La Fontaine, at the foot of which we find the extraordinary abandoned village of La Fontaine-en-Forêt. 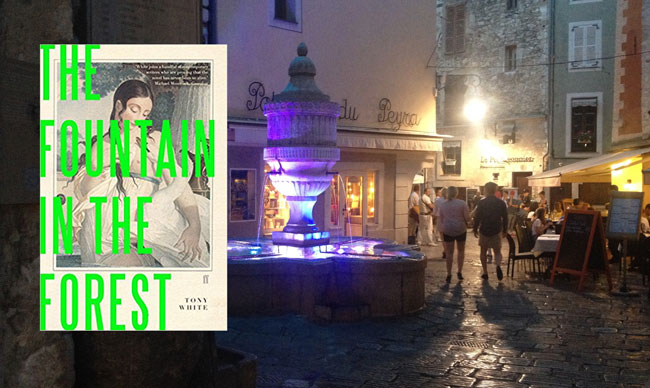 The Fountain in the Forest

When JJ – a young Englishman abroad – arrives at Cagnes-sur-Mer in March 1985, he is woefully ill-prepared. Instead of the rustic landscape he’d expected, JJ finds a huge and noisy construction site cutting a swathe through the town. A great viaduct is being built to carry the new A8 autoroute linking this part of France with Italy to the east, and Aix-en-Provence 100 miles to the west.

Today the A8 makes for a quick drive from the Airport, past the rooftops and apartment blocks of suburban St-Lauren-du-Var. Drive in the direction of Cannes, but leave the autoroute at Sortie 48. You can just as easily get to Cagnes-sur-Mer by bus or train. 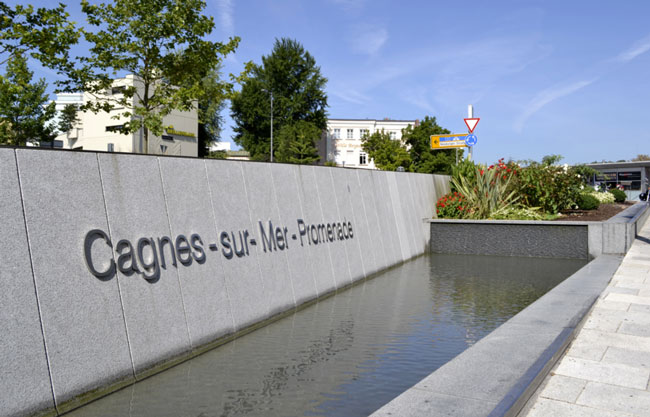 The beach at Cagnes-sur-Mer is stony, and not as broad as it becomes nearer Nice, but the narrowness of the strand means that bathing is easy: the water is warm, and only ever a few steps away. However, there is no shelter, beyond the occasional boulder, so don’t spare the SPF, and bring a parasol at midday. On a warm and golden summer evening, there are few nicer places to stop and watch the sun set – the near-constant susurrations of trains and traffic forgotten as one gazes out over the Mediterranean. 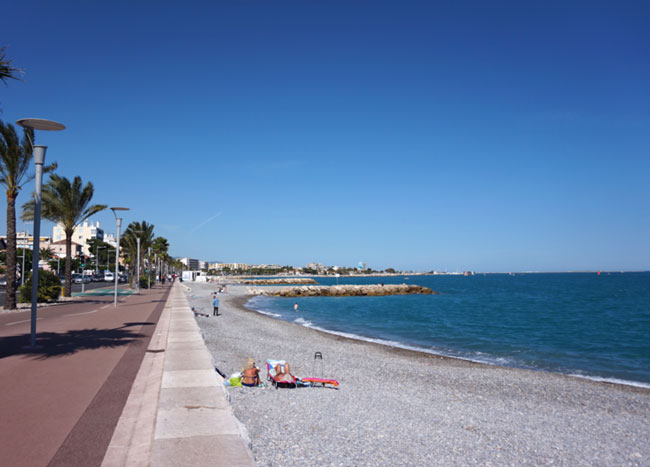 The road up to Vence brings a stunning view of the beautiful hill-top village of St Paul de Vence, once home to the great Black American writer James Baldwin. Vence itself a bustling and culturally diverse working town. For a few weeks each summer its main square plays host to a music festival called Nuits du Sud. If you can’t get tickets, you can hear everything from the pavement tables outside Henry’s Bar, at the gateway to the old town. 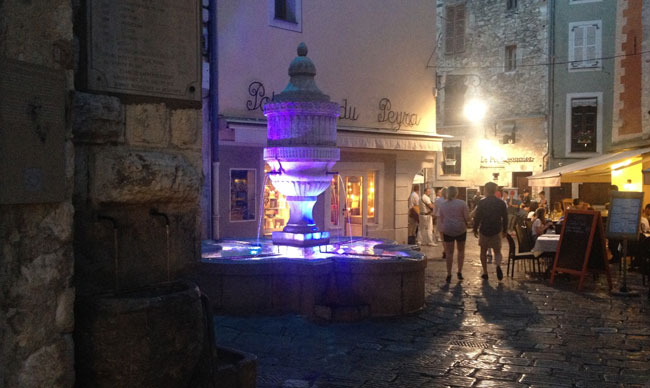 That’s where you’ll find the large, ornamental Fontaine du Peyra. Smaller fountains are dotted around the town, too: one on the square itself, another next to the Monoprix supermarket. Don’t be surprised if you see people queueing to fill bottles from these fountains, this is good, fresh, drinking water, and the town has relied upon it since Roman times. Around the corner is a point du vue that affords a spectacular panorama of the Baous, and of the zig-zag-patterned roof of Henri Matisse’s beautiful Chapelle du Rosaire de Vence, which is well worth a visit.

The modern road out of Vence – the Avenue Rhin et Danub (M2210A) – traces the straight trackbed of an old railway line for a mile or so, and if you then take a left at the first big roundabout (‘Rond-Point du Souvenir Francais’), and turn right off Chemin de la Sine after the Collège la Sine, this continues as Route de Provence, which is short-cut to Tourettes-sur-Loup that takes you over a perilous single lane viaduct and through narrow cuttings blasted through the rocks. 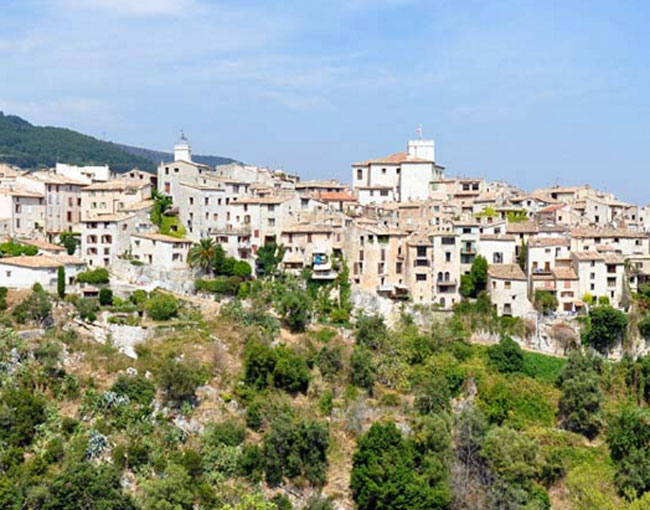 Tourettes-sur-Loup (c) Provence and beyond

Turn right at Route de la Pauvetta and you can rejoin the main road. Tourettes-sur-Loup is a breathtaking Medieval hilltop town that perches on a narrow spur of rock high above a gorge. The town was fortified by the Saracens, who held it until the 10th century. Now it is an artisans’ town – full of potteries and galleries. Every Wednesday is market day in Tourettes-sur-Loup, and you’ll find the square full of fresh, locally-grown produce.

Somewhere a mile or two further along the Route de Grasse (D2210) beyond Tourettes-sur-Loup, is the imaginary turning for my fictional village of La Fontaine-en-Forêt. You might almost have seen it out of the corner of your eye, perhaps when the road was suddenly plunged into shade by trees, or where turning a corner you were momentarily blinded by the sun’s glare. That’s where JJ ends up. Our young Englishman abroad is invited to stay, and stops awhile in the spring of 1985. 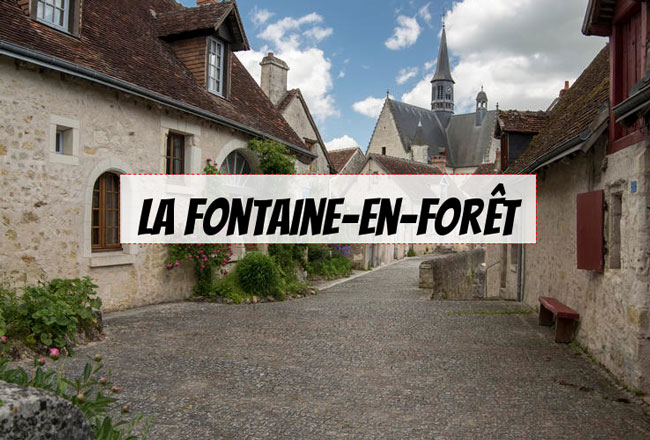 The village of La Fontaine-en-Forêt might be fictional, but it’s inspired by places visited on this trail: the monumental 19th century Fontaine du Peyra in Vence; the simple Moorish architecture of Tourettes-sur-Loup; the gorges carved through this landscape; the menhir at Courmettes; and of course the Baous. Even the huge, Italian art deco Conforti bread oven that JJ discovers in the old Boulangerie Juno in La Fontaine-en-Forêt is based on a real oven in the tiny backstreet bakehouse in Tourettes (although you need to be up early to catch a glimpse of it). All of these local truths make up a fictional place – La Fontaine-en-Forêt – that is perhaps as real as the idea that around here, for thousands of years, settlements have been built around a reliable and defendable water supply.

But as Italo Calvino warns in his wondrous novel The Castle of Crossed Destinies, there are also springs that ‘once you drink from them, increase your thirst, instead of slaking it.’ This magical part of the South of France up in the mountains above Nice may have a similar effect on you. If so, then you may find yourself, like me, returning to drink from these fountains again and again.

Thanks for this wonderful tour Tony!

BookTrail Boarding Pass:  The Fountain in the Forest