The #Britcrime 9 – Authors quizzed at the Brit Bar

BRITCRIME  9 – In between panels during the Britcrime festival, we corralled three participants into answering the BritCrime 9  – 9 questions related to British crime fiction, criminal deeds and the odd booktrail or two. The panel: 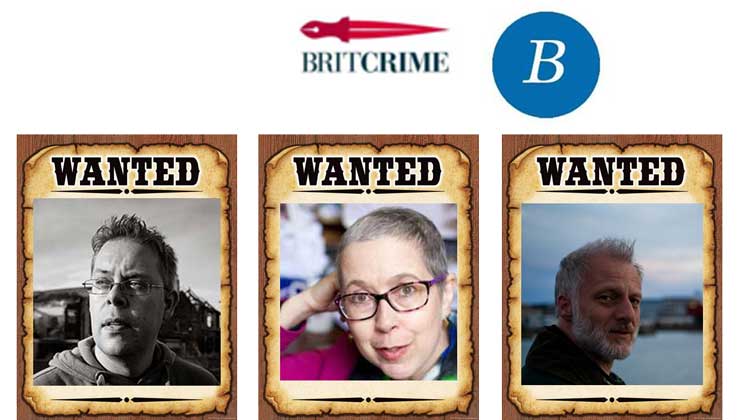 But first a word from Helen Cadbury:
“Britcrime as a festival is unique in the way it brings writers and readers together, wherever they are. British Crime fiction more generally is enjoying a fantastic high at the moment. I think these islands on which we live offer up the best possible setting for crime fiction, and that’s mainly (but not solely) to do with the weather. Its unpredictability is the perfect backdrop for unexpected events. Conan Doyle understood this perfectly when the fog rolled across the moors in The Hound of the Baskervilles. Contemporary British crime may trail further afield, but its authors retain that sense of testing the air before they leave the house.”

The questions they’ll be facing:

B – Booktrail you’d love to go on for real

R – Reality show has invited you and one of your characters to go on. Which one would it be and why?

I – Imagine you could visit any of the other Britcrime locations where would you go and why?

I – Imagine we can see into your bookshelves. What do they look like?

M – Most likely to…. What would have been written in your yearbook? and for your lead character?

E – Explore your city to us in your books. Why is your location the best one in Britcrime that everyone should visit?

– Booktrail you’d love to go on for real

NICK  – It’s maybe (definitely) not glamorous, but I’m a huge fan of Graham Hurley’s DI Faraday series, so I’m going to say Portsmouth. It also strikes me that its naval history makes it a fascinating city.

HELEN – Where would I like to go on a Booktrail? Denise Mina’s Glasgow, I think. It’s a city that has so much to offer and such stark contrasts between the old and the new. I was there recently and found myself on Garnethill Street, right in the middle of one of Mina’s books, doing an accidental Booktrail, so I’d love to go back and do it properly.

QUENTIN – I’d like to go on a Booktrail around the London that features in the Ipcress File, preferably with a step back in time to see it at its grimy 1960s best. Otherwise, Anya Lipska’s Polish London (and Poland)

Reality show has invited you and one of your characters to go on. Which one would it be and why?

NICK – I can totally see myself and Luke Carver ripping up the dance floor on Strictly Come Dancing. Totally. You can see an example of my athleticism during the five-a-side football match at the Harrogate Crime Festival shortly…

HELEN –  Something on an island. Sean Denton and his police colleagues sharing an island with some of the less law-abiding characters from the Doncaster streets. Sean’s Nan, Maureen, would be loving the winter sun, but the theft of the islands’ last coconuts by a far-right Chasebridge home-rule separatist group would spark a massive conflict.

QUENTIN – Erm… No idea. I’d quite like to see Gunnhildur as the star in a reasonably priced car, after which she could arrest Jeremy Clarkson

Imagine you could visit any of the other Britcrime locations where would you go and why?

NICK – This is tough…does America count via Mason Cross’s Carter Blake novels? If that’s technically cheating, I’ll go for Jay Stringer’s Glasgow. I don’t know how I’ve got this far in life without visiting the city.

HELEN – I would go to St. Ives, with Amanda Jennings’ In Her Wake. She reminds us that the sun doesn’t always shine in Cornwall, but it’s still beautiful in a storm.

QUENTIN – That would be Amsterdam, where Daniel Pembrey and Marnie Riches both set some of their books. Sorry, Britain, I go for somewhere overseas every time.

NICK  – Absolutely anything from “Jack’s Return Home” (filmed as “Get Carter”) by Ted Lewis. So many iconic scenes.

HELEN – I’ve just finished reading Ruth Ware’s The Woman in Cabin 10 and it would be a spoiler if I told you the exact moment, but it comes right at the end and made me punch the air.

QUENTIN – Difficult question. I’d have liked to have been a fly on the wall as Karla finally came through Checkpoint Charlie.

NICK  – I suppose you always want to be the decent guy, the one people like and admire. But it’s also tempting to be a Jack Reacher or a Jack Carter (why is it always Jack?). They don’t take any shit.

HELEN – I’m a lot like Karen in To Catch a Rabbit, in some ways, or at least I think I felt like her when I was writing my debut. She is caught between working out who she is, and her responsibilities to those around her. Come to think of it, that applies to Sean Denton across the series. I would like to be Simon Toyne’s Solomon Creed, he’s extraordinary and mystical, and has powers that he doesn’t understand himself.

QUENTIN – I’m not sure I’d like to be anyone else, fictional or otherwise, although I suppose Steini is something of a version of me, except that he’s more practical and doesn’t swear the air blue quite as much as I do.

NICK  – So many! I’ll choose one readers might not be aware of, so I’ll go for Ian Ayris’s novels. They’re set in the East London, but it’s a side of the city you don’t normally see.

HELEN – Paul McVeigh’s The Good Son, set in Belfast during the troubles. Any Booktrail would have to be undertaken with extreme sensitivity, but this book gave me a window into a place and time that I thought I knew about, but it turned out I didn’t have an inkling. It’s a coming of age story which is more universal than its setting might suggest.

– Imagine we can see into your bookshelves. What do they look like?

NICK  – Sadly, I’m not a book hoarder. My house isn’t big enough to house all the books I’d like, so I send stuff off to the charity shops fairly regularly. My bookshelf contains the ones I can’t bear to part with and my ever growing pile of ‘to be read’ pile…

Most likely to…. What would have been written in your yearbook? and for your lead character?

NICK  – We didn’t have such a thing in Hull when I was a lad! I don’t know what would have been said, but it certainly wouldn’t have said ‘writer’. For Anna Stone, it probably would have said ‘cop’, which is maybe why she’s so conflicted about possibly leaving it behind her.

– Explore your city in your books. Why is your location the best one in the Britcrime festival that everyone should visit?

NICK – I think Hull’s a mystery to a lot of people, largely because it’s not a place you pass through. You need a reason to visit, and what could be better than us holding the 2017 UK City of Culture title? Also, we serve up amazing patties (deep fried potato and sage) served with a side order of more potato in the form of chips. It’s amazing. You won’t starve if you come to Hull.

HELEN – You can spend a long time in Doncaster and not find the Chasebridge Estate, because it’s fictional, but if you want to get close, you could go to Edlington, or have a look at the Balby Flats, which you can see from the train. But my real recommendation would be to go to Doncaster Market. It’s a series of interconnecting halls and a fantastic range of stalls, from food to bric a brac and everything in between. It will feature more in my third book, but in Bones in the Nest, Sean goes for a drink in the Red Lion, on the edge of the Market. It’s a Wetherspoons and very good value, great for people watching.

QUENTIN – Reykjavík is small city, the size of a smallish European market town, but with all the stuff that a capital city has, government, embassies, airports, services, etc – and crime and corruption in spades. It’s growing fast, lots of glass, concrete and steel where there were once quaint districts and a unique feel, all of which is being swallowed up. It has also gone from being a sleepy little place to quite a buzzing multicultural city as the new immigrants have transformed much of Reykjavík, in good ways as well as some less good ways. Reykjavik isn’t necessarily the best location… but it’s my location. And everyone shouldn’t visit it, as it’s already going through a humungous tourism boom that it can’t cope with as it is.

The bar has now opened and so they’re off. But thanks for joining the panel! They’d better not have too many – there’s more Britcrime live Panels to come!