A visit to China today with the adventurous Spencer Wise, author of The Emperor of Shoes…

I spent the summer of 2014 working as a quality control inspector at my dad’s factory in Guangzhou to research this novel. I did a real apprenticeship, learning every facet of the shoe business. So this novel is an authentic, first-hand look at the factory world.

I lived at the factory amongst the managers and workers. I interviewed many of the workers using translators, and I made a few deep friendships with some of the younger supervisors who not only showed me the inner-workings of the factory, but, in a few instances, were generous and caring enough to invite me to their homes and meet their families. The Chinese people I met were tremendously proud of their culture and traditions, and I think they were excited to share that with me. I also spent about six months reading anything I could about China. Like the Jews, theirs is an ancient culture. There’s a lot to explore.

And now, for a very special tour…. 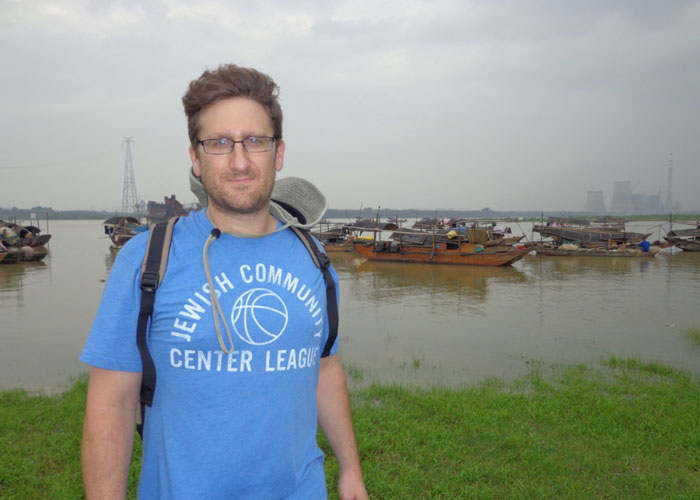 “The whole afternoon had quietly slipped past since I got on the back of Ivy’s motorbike at the shoe factory like a lunatic who wants to get kidnapped, as my father would say, and she took me here to her grandmother’s riverboat on the eve of the Tomb Sweeping holiday when it’s expected that all children come home.”

This is where the novel begins. A fishing village on the mighty Pearl River. A vanishing world. You can see the giant nuclear power plant looming in the distance. Ivy’s grandmother lives here in the Sanshui district of Foshan where the Xi, the Bei, and the Dong Rivers meet. The novel starts on the Tomb Sweeping Holiday. Ivy has brought Alex here to pose as her fake boyfriend to make her grandmother happy, and Alex is late to meet his father (and boss) for dinner, but he’s having a much better time hanging out with Ivy.

The Tanka people, an ethnic group, live here on the river. Smarter folks than myself have written about the Tanka culture and traditions, which are slowly dying out. It’s devastating to see the demise of this world. They live on boats obviously, and it’s predominantly a fishing culture. You must go see this. It’s beautiful. The boats are works of art. They were mostly fishing for Mud Carp and selling it for a living. In ultra-capitalistic China, you can imagine that this type of business model can’t last much longer. I don’t know why I thought it was so beautiful. I thought of my own grandparents speaking Yiddish and how that language is almost extinct now. I was thinking about how resilient humans are and yet how fragile their cultures. 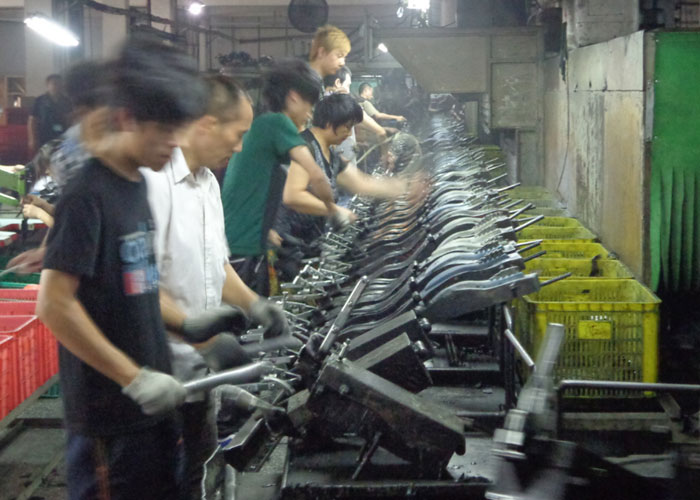 Anyhow, my friend Yongxi took me there. He worked at the shoe factory with me. Here’s the sad news about this entire travel guide, and I might as well get it out of the way now: you really need to either speak Mandarin yourself or travel with Chinese people to get to most of these places. You can’t just roll up to a village on a bicycle, wave to a goose farmer, and shout, “Yo, what up!” That would be weird. But all hope isn’t lost! I reached out to people on couchsurfing.com whose profiles indicated that they were interested in Chinese history and culture and I asked them if  I could buy them a coffee and learn about China. I didn’t ask for a place to sleep, I had one of those already at the shoe factory dormitory, but I just wanted to talk to people. Turns out they were eager to talk to me because they wanted to practice their English. So it was a nice quid pro quo. In the long run, some of these folks became close friends and took me to some of these places that wound up being so key for the novel. But you need an insider. 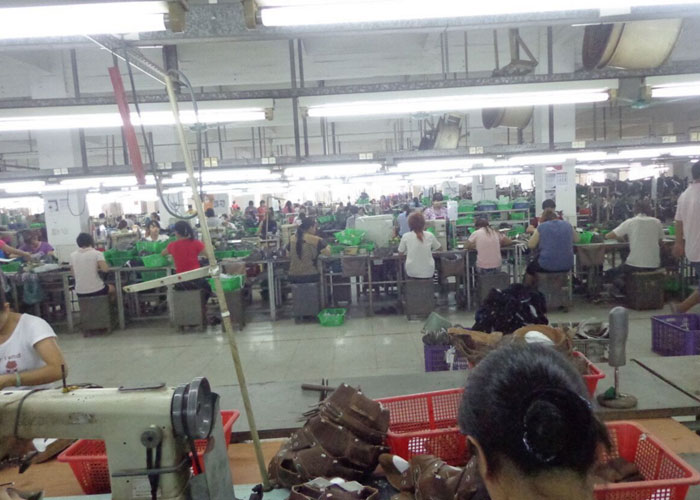 “Even though we were only an hour from Guangzhou, no taxi driver had ever heard of these roads. On Google Maps we were a blank gray stretch intersected by a few highways. You had to be led here.”

This is where most of the book takes place. A shoe factory. My family has been designing and manufacturing shoes for five generations, so I was able to work here for a summer as a quality control inspector. This is another place you can’t go visit on your own. Sorry. But you can travel to Foshan and see the industrial hustle. It’s the bra capital of the world! That’s something. They have a big sign bragging about it at the entrance to the city. There’s also a toilet bowl waterfall because there’s tons of porcelain and ceramic factories there. My favorite ceramic tile shop boasted this slogan on the sign above their store, “A burning hardness and a second burning of style.” That’s poetry.

But that’s Foshan. Name a thing, and I guarantee it’s made here. Those smile face plastic bags you get from the bodegas in NYC are made here. Same with those Greek style paper coffee cups you get from every street cart. What else? Grinding blocks, autoclaves, sealants, hoses for cars, hoses for machines, hoses for hoses, hoses for things that don’t even need freaking hoses now but definitely will need some in the future. I never thought of where this stuff came from before. I sort of thought we walked out of the primordial swamp holding 5-spray shower heads and stainless steel sink faucets. God created light, but Foshan created dimming light bulbs. Anyhow, you deserve to see the industrial sprawl first-hand. Stuck in the middle of this craziness is the Foshan Ancestral Temple, which is gorgeous and fascinating. 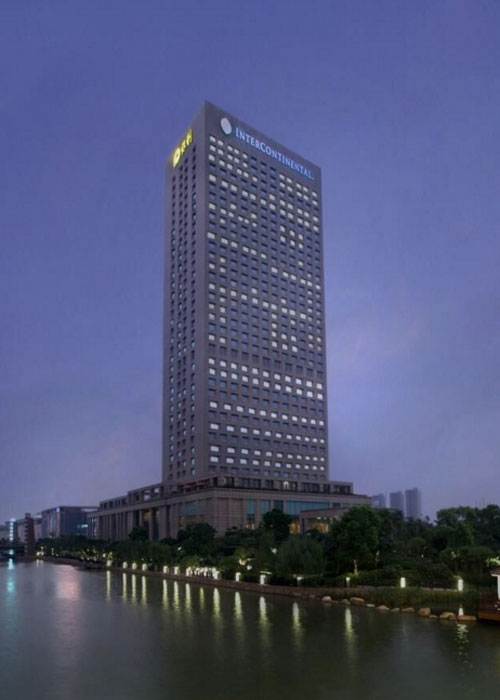 “The lobby’s crowded with loudmouth foreigners, but we’re all one thin pane of glass away from being totally lost. I don’t even know how to get to the factory from here. I’ve never driven in China. Forced outside, I imagine us all walking aimlessly down the street in a herd, scrutinizing signage we can’t understand, ignoring the plosive tongue-clack of cab drivers, a slow barn-animal procession down the highway; cud-chewers ready to walk off Shusheng bridge into our own reflections.”

This is where Alex and his father live in the book. It’s their homebase, and it’s where they (particularly the father) feels safe and powerful. In real life too, this is where are all the clueless business people stay when they come to China to do business. Some live here for months on end. Everyone sticks to their clique like high school. The bra people sit over in the corner away from the shoe people. There’s tons of very talented Phillipino bands crooning dreadful American hits from decades ago. In fairness, it’s a very nice hotel. They played Bob Dylan in the lobby, which I thought was weird but awesome. The perfumy air freshner is like mustard gas, making your eyes water, your stomach nauseous. The floor boys follow you around and make sure you aren’t partaking in any funny business. There were great characters everywhere. The staff are all very austere and formal. There’s a wonderful park across the street where Chinese folks go for an evening walk.

And on that note, it’s getting late in China so Spencer Wise is off to bed. Come back tomorrow for part two…