The Jackson Brodie tour of Edinburgh

Many of you will have read at least one book by Kate Atkinson – especially her Jackson Brodie series which has been a very successful television series too.

Well, having read ‘One Good Turn’ recently as preparation for attending the Edinburgh book festival where I will be attending one of Kate’s events, I smiled as I revisited a lot of the sights of Edinburgh featured in the book.

Then it got me thinking.What would it be like if Jackson Brodie were a tour guide? I mean if I could wander through the streets of Edinburgh accompanied by the great man himself. What would I see and do?

So that’s exactly what I did and it turns out that Mr Brodie is a very interesting guide indeed.

The setting during the Fringe Festival in Edinburgh, Scotland is a great back drop, and the details of Scottish life made me smile at the memories of living in Edinburgh and attending the Fringe on many an occasion: 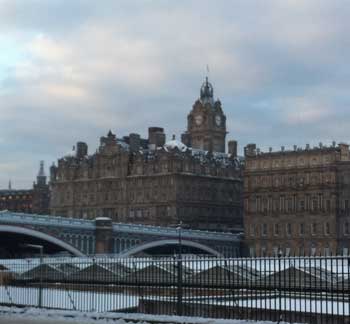 ‘When he stepped off the train in Waverley station yesterday, he had been expecting the 50 per cent of his genes that were Scottish to recognise their heritage.’

‘The rain had in no way deterred the crowds – it had never occurred to him that Edinburgh was in the middle of ‘the festival’ and that there would be carnival hordes of people milling around as if the end of a war had just been declared.’

Looking up from Princess Street gardens 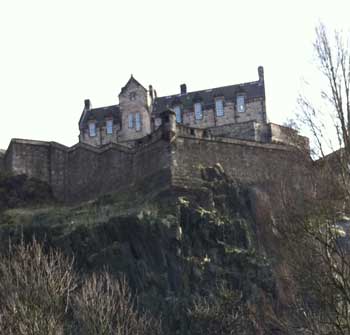 ‘The castle was a brute of a building,  all fairy-tale Scottish from below but once you were within its glowering walls it was dank and doom- laden’ – page 68

‘A rustle of excitement preceded the One O’Clock Gun. The story went that the citizens of edinburgh had been too mean to pay for twelve cannon shots for midday and so had settled for a gun at one o’clock.’

‘He had a look in the building at the heart of the castle that housed the Scottish national war memorial. He was surprised at how beautiful it was inside..{} …The names of the dead, so many dead, were written in big red books’

As for the story of the one oclock gun – this would be funny if true but the one thing I remember at uni and long after was the game I enjoyed playing of ‘Spot the tourist’ where at just before one o’clock if on Princes Street or the Royal Mile you and your friends pick someone who looks like a tourist and then wait to see if they jump out of their skins when the gun goes off. Sad but true.

For those of you who haven’t visited the magnificent castle:Visit it here 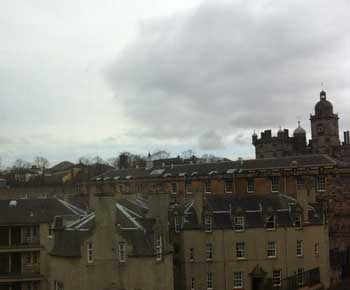 ‘He walked down to Holyrood palace, bought a poke of chips and walked back up the Royal mile.’

The roof tops of the old town
“Back outdoors in what passed for daylight, he was greeted by ancient, tall tenements staring blankly at each other from either side of the street, making it feel more like a tunnel, making it feel as if night had fallen. If there had been no people around, you might have mistaken it for the film set of a Dickens novel. You might have mistaken it for the past itself.”