Magical mystery set in New York – The Starless Sea Erin Morgenstern – A novel that is set in…. New York city and below ground. It’s mainly set deep inside your imagination. This is a story set in an world of secret doors, books, stories, libraries and so much more.

I loved The Night Circus. This is just as magical. More so in many ways. I was in New York one minute and then a secret door opened and I was in another. A boy finds a book in a library that seems to contain his life in its pages, so he goes to investigate. Soon, he’s going from one place to another, finding clues and meeting some very interesting characters. He attends a  LITERARY MASQUERADE BALL. Yes, you book lovers are in for a treat with this one.

Are you sitting comfortably? Let the adventure begin… 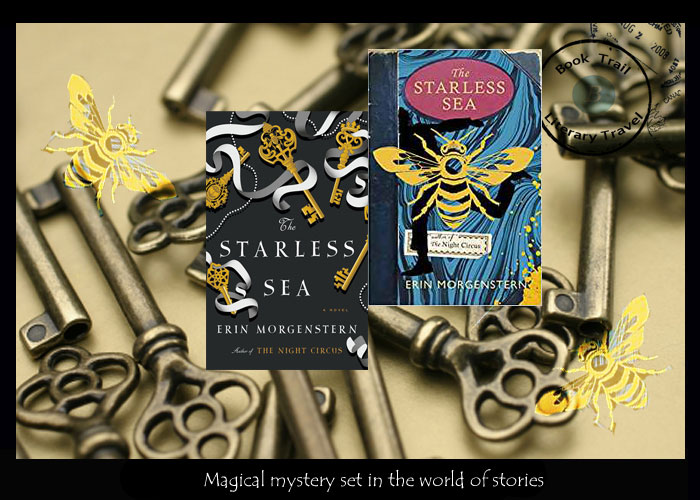 This is a magical read. Magical. Set in the world of stories with underground libraries and books everywhere guarded by secret members who arrived in this world through magical doors. They came from the world above, through magical doors painted on to walls. Now they guard the stories, the Starless Sea and look after the humans from above who find a magical portal into their world….

In the world above, the main characters is Zachary who finds a door when he’s very small and doesn’t realise until many years later what it meant.  At university, he finds a book. This book contains the story about the day a young boy found a door painted on a wall and who didn’t try to enter it. He knows it’s his story and that first shiver of bookish excitement shimmers its way down your neck.

And so starts a journey which takes Zachary to New York’s public library.One of the few real locations in the novel but if people don’t go here toread this book and to see the two stone lions at its entrance, then I will be surprised. What better novel to showcase the magic of NYC library than this one? It’s a portal to the Starless Sea and provides Zachary with a clue to where he must go next in order to find out about his story.

Oh the settings are just magical…there’s a literary masquerade ball, a visit to the Strand bookstore and a very magical walk in Central Park. It’s the wonderful underground cavern of stories that is the most magical and the harbour from which you ride on the Starless Sea. This author has one amazingly vivid imagination and this book was a real treat, an experience.

The book was cleverly written – that prose is like butter on a hot scone – it oozes down to every level and you taste it throughout the experience. Think of marshmallows on a goblet of hot chocolate – as you sink down into it, immerse yourself fully in the reading. The tasting of each and every word gives you the delicious sense that you are swimming in Erin Morgenstern’s imagination…

The story is told in ‘books’ and interludes of stories that at first don’t seem to link to the main thread with Zachary…but they do….oh boy do they. The stories build up to create the world of the Starless Sea and at the same time, Zachary’s descent into this world begins. The flow and mix of the two is a literary lover’s delight.

Watch out for the symbols – the bees, the dagger and the keys are strong symbols of the world below. Doorknobs are very important – I swear you’ll be looking at them very differently from now on. The real treat of this novel was how the fantasy world merged seamlessly with the real – at one point Zach goes to a Starbucks and it’s NOT your usual visit…

This is a book to discover. I’m not even sure I would know where to start describing all the symbols, characters, clues and why the Starless Sea is made of honey. Although this is clearly a fantasy world, it’s not a fantasy novel…. this is so much more than that. It’s the world of your imagination, layers of stories blending and merging into a picture where the more you look, the more you see.

The Starless Sea is a book-lover’s riddle, wrapped in a timeless mystery, inside an literary enigma; and there’s certainly more than one key to unravelling and luxuriating in the world created.