We assume you’ve read Jane Eyre before you read this ‘Jane Eyre Trilogy’ as well there are a few mentions of a certain someone who appears in the story but is only revealed slowly….

Before we even return to the desolate and remote moors of Yorkshire and the towering imposing home of Thornfield Hall, we are thrust into the heady and sweaty days of Jamaica at the time of the Slavery Abolition Act of 1833 . 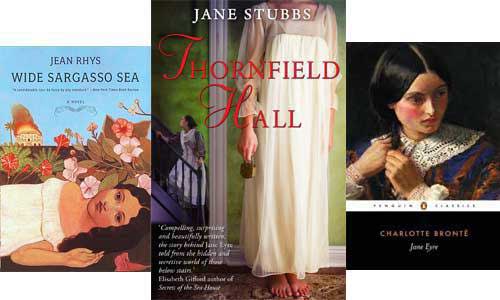 Money, power and influence still spoke however when Mr Rochester arrives in Jamaica…. 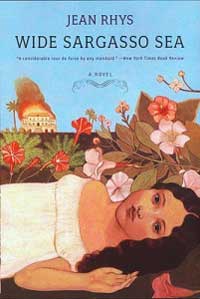 This is the start of the story of a certain young girl by the name of Antoinette – for she will have arole to play in these three novels and her story will be tied up in everyone else’s as indeed it wil be in the story of Thornfield Hall itself. She tells her story of her arranged marriage to an Englishman by the name of Edward Rochester. She reveals her difficult childhood and family life with the problems of her mother and brother both having mental health issues.

Once married they travel to Granbois in Dominica and Edward and Antoinette who he has named ‘Bertha’ – his suspicions of his new wife and of her family background and her suspicions of whether he is faithful and whether he married her for anything other than money.

With Bertha’s paranoia and mental state suffering, she is taken to Rochester’s home in England, together with a maid Grace Poole and her life becomes even more painful and punishing. She is soon driven to extreme measures…

Bertha’s background is revealed and her Creole heritage examined and contrasted with Rochester’s rich and privileged one.

While Rochester is keen to marry for money and land, possessions and t be able to control the ‘secret’ of the locale. The novel was written to reflect the time and setting of English colonialism and Jamaica’s road to freedom. Rochester’s words on the landscape of the country of his new bride – 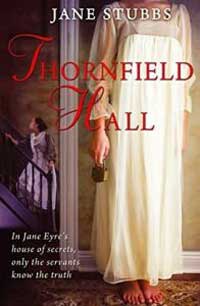 Berta is taken to his English home – his turf, his homeland where she will be easier to manage and control. She and Grace are set up in the house with the help of Mrs Fairfax who now takes over the narrative of how she came to know and work for Mr Rochester.

Thornfield Hall becomes darker and more prison like in this novel and the ‘behind the scenes’ events and the whispers of the servants make this a thrilling and secretive visit to the hall with secrets in its walls….

The Main street in Haworth – pic courtesy of Wikipedia – perfect for wandering down with Jane Eyre and Mr Rochester
We walked carefully on the roof leads for the wind was buffeting in from the east. Leah leant against the battlements and took in the view, the patchwork of fields the toy cow and the miniature sheep. This I reflected would be a splendid place for an invalid who lived secluded from society to come and take exercise and enjoy the fresh air, though a lady who had lived on a tropical island might find the Yorkshire air bracing. 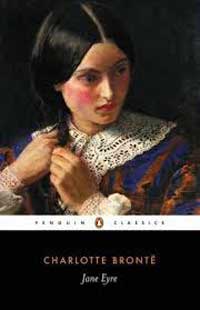 This is the story of the governess who comes to Thornfield some time later and who at first does not know of Bertha or who she is, nor of her past. Jane is nervous at first of the strange noises she hears, of Rochester’s strange behaviour and of the servants’ behaviour towards her. That Mrs Fairfax has some strange ideas she thinks and doesn’t seem to appreciate her growing relationship with Mr Rochester, but the full facts are not always at her disposal. The secrets are once again in those walls of Thornfield Hall….

The Bronte Parsonage –  A must see for the Bronte aficionado

Jane Eyre describes her arrival at Thornfield, her sense of needing to pace the corridors and to be free from social and physical sense of being trapped in a man’s world.

I could not help it; the restlessness was in my nature; it agitated me to pain sometimes. Then my sole relief was to walk along the corridor of the third story, backwards and forwards, safe in the silence and solitude of the spot, and allow my mind’s eye to dwell on whatever bright visions rose before it.

It is in vain to say human beings ought to be satisfied with tranquility: they must have action; and they will make it if they cannot find it. Millions are condemned to a stiller doom than mine, and millions are in silent revolt against their lot.
The ‘Jane Eyre Trilogy’ is an epic story of Thornfield, the background and history of its inhabitants long before Jane Eyre ever even hears of it. The Hall is the main character throughout, a hall of imprisonment, but also of salvation. A Hall which will also give Jane Eyre the adventure and achievement that she never thought she would have from her days of ‘torture’ at Gateshead school.

To experience this story – seen through the eyes of three different authors and various characters within the house and beyond it, this is an epic tale of an old hall and its inhabitants, its secrets, its history and the effect of legacy and duty on all those who live there. Listen to the whispers of the secrets from its walls……

For more information on the settings of these wonderful series of books – we found the Bronte parsonage and surrounding area to be THE place to visit and the Visit Yorkshire website. If you take any one of these books with you the area will come more alive than you could ever imagine……