Jackson goes to the book festival!

In the book ‘One Good Turn’, Kate Atkinson of course features a lot of the action in and around the book festival and the fringe festival on the Royal Mile.  This enables her to write some acute observations on the atmosphere and the people who attend the writer events.  Read Kate’s words and imagine yourself right there. Linger on Jackson Brodie lingering at the back of the tent. Or Jason Isaacs – whatever takes your fancy. 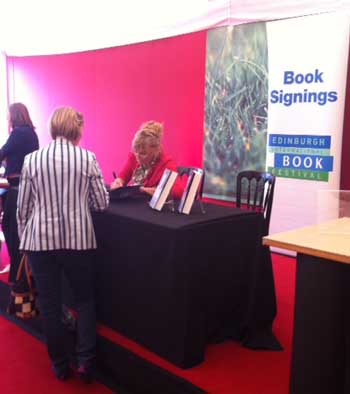 Kate Atkinson in the signing tent

‘CRIME WRITERS FOR LUNCH’ – As if they were going to be eaten  by their audience. “Lunch’ was coffee and filled white rolls, which were free and served from a bar at the back of the Spiegeltent. And the writers were the entertainment. Dancing bears.”
The rest of the description of the book festival is as witty and amusing as it is an honest and very apt observation of the festival atmosphere. Having been in that tent with writers answering questions and hosts directing anything the audience throws at them, it was as if I was right back there, watching  the great Kate Atkinson in admiration and recalling the words of the novel in my head as she spoke.

Was this life imitating art or the other way around? Kate did talk about Jackson Brodie and I did think that, like in the book, if I turned my head, he might be standing there at the back of the tent, watching as Martin described:

“He looked for Jackson and saw him standing near the bar, straight-backed with his hands in front as if he was going to stop a penalty shot. All he was missing was the black suit and the earpiece to make him look like a presidential Secret Service agent.”

“The audience was predominantly middle-aged and female, as usual at these events… ”

When it came to question time, hands shot up everywhere. Young people, student types, ran around with microphones and Martin braced himself with questions”

“In the signing tent, they sat at three identical tables. Every time an eager reader approached him Martin felt a little knock of panic to his heart, imagining each newcomer reading across the table as he signed his name and stabbing him with a knife, shooting him with a gun.”
I really hope Kate didn’t feel any of this ‘panic’. Everyone seemed nice and chatty in the queue and Kate herself was pleasure to meet -chatting and joking all the time. I laughed as I did overhear two women discussing the fact that Kate had mentioned that she was born just after the war – when her novel was set – and they were working this out in the queue.  ‘I can’t believe it. She looks a lot younger! I hope they told Kate this! Someone else I got chatting to, was happier to talk about her book rather than her appearance thankfully and she was keen to tell me what she would like to change in her life if she got the chance ‘to do it all again until she got it right’.

I asked her what she would do differently. She smiled at me and said ‘Ooh I don’t know really but it just sounds a bit tiring that’s all. I mean doing things over and over? I think I’d need to write a list to remember what I’d done the first few times.’  Ooh I did laugh with her. She was clearly a Kate fan – had read every single one of her books she told me – and was going to tell Kate that. I do hope she did and that Kate had a nicer and less eventful time than the Martin character in her book!

The Royal Mile – home to the festival 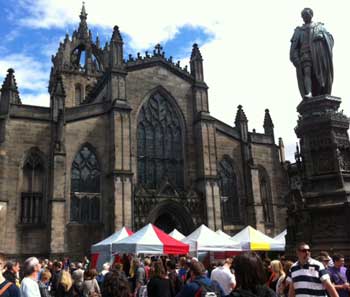 The Royal Mile was beginning to feel almost familiar to Jackson now. He felt like turning to the nearest person and pointing out to them St Giles Church and the new parliament building (ten times over budget – how could anything be ten times over budget?)

Jackson goes on a little walk, taking just a morning and sees some interesting parts of Edinburgh at the castle end of the Royal Mile: The Camera Obscura for one is a popular tourist attraction with stunning views over Edinburgh  and a Magic Gallery and Electric room for example. Wonder what Brodie made of it all? 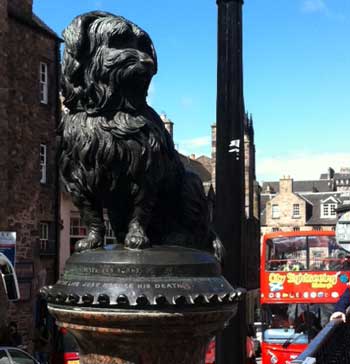 I took a walk,’ Jackson said, ‘went to a museum and the Camera Obscura. Had a look at Greyfriars Bobby’s grave –

The statue in memory to the lovely Greyfriars Bobby
‘Oh.’ Julia made a  tragic face. The mention of a dog, any dog, always provoked an emotional reflex in Julia but the idea of a dead dog upped the ante on the emotion considerably. The idea of a dead, faithful dog was almost more than she could handle.

“Yeah, I paid him your respects,’ Jackson said.

The grave The mound

“Jackson  climbed on board the 41 bus on the mound and thought, OK, if she wanted him to take a bus he would take a bus. The 41 covered a long route that ended up at Cramond. He knew Cramond as a hymn tune, not a place. Or was it ‘Crimond’? So many things he didn’t know. ‘The Lord is my shepherd’. Was he? It seemed unlikely somehow.”

“An old woman waiting at the bus stop with him said, ‘Oh, it’s very nice out in Cramond, you can go to Cramond Island from there. You’ll like it.’ He believed it; years of experience had taught Jackson that old women tended to tell the truth” 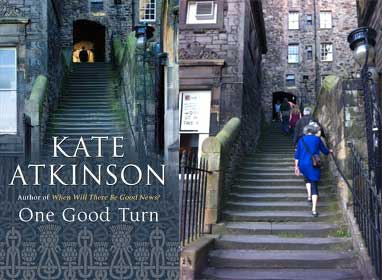 There are many small alley ways  along the Royal Mile – one was even featured on the cover of the Kate Atkinson novel itself: so I took my own advice and revisited the cover so to speak:

Jackson fought his way up the royal mile , through the crowds and the tartan tat, until he finally gained the castle, soaring almost Cahtar-like on top of the volcanic rock.

“Crowds flowed down the Royal Mile like the lava that had once moulded landscape out of fire, moving around obstacles in  the way -the statue of David Hume , a mime artist, a piper, several student theatre groups, people handling our flyers (lots of them) , another piper, a man eating fire, a man dressed as Sherlock Holmes. Another piper. It certainly was a city en fête.”

Just before I left the Royal Mile to head back to the book festival, I noticed something that made me smile. Something that would have made Jackson smile I think – I hope even that it might have been named in his honour. Yes that’s going to be the version I tell myself as it’s the one he and Kate deserve.
I left Jackson here but thanked him for taking me on this interesting tour of his city. I hope you’ve enjoyed it too.