Book set in Burma – The Missing Sister by Dinah Jefferies

The ebook is out now and the paperback comes out in the UK later in Marc. But book your travel to Burma right now as this book will transport you there and into a web of lies and intrigue

The locations Dinah evokes in her stories are always brilliantly done and this one is no exception. It’s the story of Belle Hatton who is a nightclub singer in 1930s Burma. She is haunted by the past  – the fact that her family, the Hattons left Rangoon after the disappearance of their baby daughter, Elvira.Her sister….

BookTrail Travel to the locations in The Missing Sister 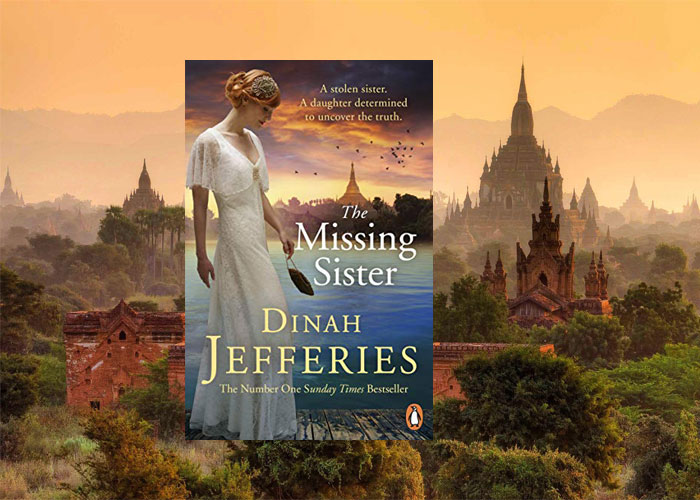 BookTrail Travel to the locations in The Missing Sister

Setting:  1930s Burma, the nightclubs and the bars, the mystery of a missing child…

There are some authors you can always rely on to create magical stories with twists and turns. All set in the most stunning and captivating locations! Dinah Jefferies is one of those authors. Her way of writing and evoking locations, together with the interweaving stories are a fascinating and very successful mix.

The Missing Sister intrigued me from the start. Burma in the 1930s – nightclubs and the hot buzz of the city – I was there! Add to this the story of a girl finding out about her missing sister and then going on to search for her was a compelling premise. The various strands of the story built nicely, wove in and around the lyrical writing and really created a narrative I didn’t want to end.

This was essentially an historical drama but Dinah’s attention to detail meant that I learned a lot about Britain’s occupying years in the country and region. There’s detail but never too much.  You soon realise by the end just how much of an insight into the mystery and the heritage of the country you’ve experienced. That’s always a joy for a reader isn’t it? A story that lingers and stays with you.

There were parts of the story set in Cheltenham with Diana’s story which worked well too, but it was Burma that really captivated me. The contrast between two such different places was nicely done!

Back in Burma, there were two characters richly described and part of Belle’s story who I was particularly interested in. You’re never sure if you can trust him but he’s got that smouldering presence you can understand Belle is going to either love or hate. Gloria de Clemente, was the other character I enjoyed meeting. She was an influential wealthy British socialite who lived in Golden Valley which is where Belle’s parents once lived. Could she and brother Edward in Rangoon help her solve her family’s mystery?