Travel with The Interpreter from Java and Alfred Birney

Interpreter from Java and Alfred Birney

Travel with The Interpreter from Java and Alfred Birney – Author talks Java locations and research behind the novel….. 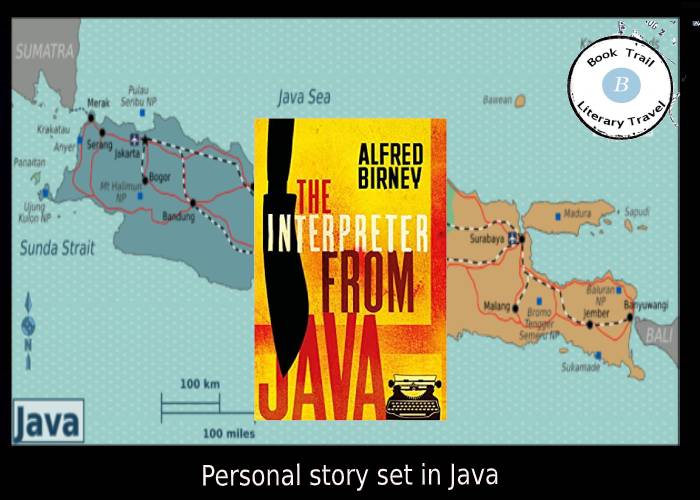 My novel The Interpreter from Java was a long time coming. The most exciting of my extensive preparations was my first trip to Java at the end of 1987. From the capital Jakarta, I took the northern train to Surabaya (tip for travellers: take the southern route, it’s much more scenic). There I spent five weeks with my aunt, jotting down her stories. The city heat was stifling and, climbing onto the back of my cousin’s moped, I visited the streets where my father once lived. My cousin drove me to the Red Bridge, scene of a mythological battle between Sura (shark) and Baya (crocodile). There was no clear winner and their fight to the death continues on Surabaya’s coat of arms. This bridge is where my novel ends. 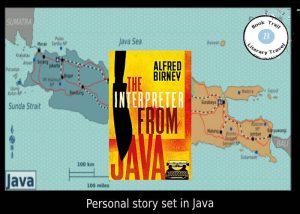 Surabaya is a vast sprawl of predominantly low-rise buildings. Twilight barely exists so close to the equator. Night falls within ten minutes. Local residents were responsible for lighting the streets of their own neighbourhood, so the lines between flesh and blood and shadow often seemed to blur, evoking the ghosts from my father’s stories.

Twelve years passed before I returned to Java, this time for a week-long symposium at the Universitas Indonesia in Jakarta. Never had I been immersed in such a pandemonium of sounds, carried on the stink of mopeds, motorcycles and cars while planes coming in to land flew so low that my teaspoon rattled in my glass as I sat at a table on the hotel terrace, watching bats skim the surface of the pool. I fell in love with that city, where people laugh at everything, no time to contemplate the worst. Death is everywhere, life is everywhere, love and hate is everywhere, everything this existence can throw at you is teeming in Jakarta’s streets.

It was there that I first met Meggy Soedjatmiko, who became my Indonesian translator, and two years later she joined me on a promotional tour of Java’s main cities. With radio and television appearances and a string of journalists in tow, I found in two weeks a level of fame it had taken me twelve years to achieve in the Netherlands. On that tour and the next, two years later for another book, I got to know some wonderful cities. Malang, for example, where my father’s sisters had been wartime internees, where nature is so clean and life so peaceful.

The highlight was my visit to Kediri, my grandmother’s birthplace. Perhaps I was only fooling myself, but walking on the banks of the Brantas in the sweet evening breeze I felt at home for the first time in my life. Left to my own devices I would have gladly stayed but the pull of my life back in the Netherlands was too strong. I would like to go again, for a fifth time, and travel on to Jember,. This is a city central to my family history. I can’t help thinking there’s a reason why I’ve saved it till last.

With many thanks to Alfred Birney and his translator David Doherty