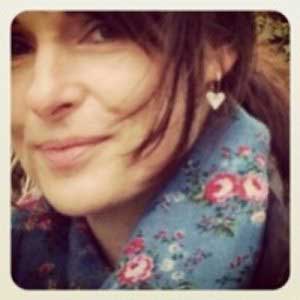 Iona Grey, author of the wonderful, historical and romantic saga Letters to the Lost has come over to Booktrail Towers today on the premise that we will open the hamper of wartime goodies, put the cherry tarts on a plate and pop the kettle on the stove. All done. We’ve even put out the bunting. That’s how excited we are…

Hi Iona! Welcome to Booktrail Towers. Please do come in and take a seat….(we’re all dressed up in polka dot dresses, mary janes and stockings with black lines up the back. ‘Dancing cheek to cheek’ is on the gramophone in the background to add to the atmosphere…

Oh the questions we have about your book! Here have a slice of battenberg and we’ll tuck into cakes and questions!

What inspired you to write Letters to the Lost?

A glimpse of a handwritten letter, lying open on my daughter’s desk as I passed by her room one day, and the whisper in my head of the phrase Letters from the Lost. I wrote it down straight away because I thought it would make a good title for a book, and then couldn’t resist working out what the story behind it might be. (In the end ‘from’ became ‘to’, though the file name on my computer never changed!)

You recently put together a Letters to the Lost themed hamper. Can you share with us how you researched the food during the war – the battenberg cake, the eggs and those tinned peaches!

I’ve been a total WW2 geek for many years and have read just about every book (fiction and non-fiction) and watched every TV documentary and drama imaginable, so I had plenty of accumulated information to draw on! I was also lucky enough to be given a stack of Woman’s Weekly magazines from the late 30s and early 40s which gave some great insight into popular dishes of the time, but probably my greatest source of information was my Mum, who was born in 1940 and so grew up with rationing and wartime food. She still shudders if you even say the words ‘powdered egg’!

Have you ever tried bloater paste?! What do you think of Spam?

I haven’t ever had Bloater Paste, thank goodness – can you actually still get it? (Quick trawl of Sainsbury’s online suggests not, though Sardine and Tomato Paste is still an option for your sandwiches, apparently…) I have had Spam though, as it had a regular slot on the school dinner menu when I was at primary school. I don’t remember particularly disliking it (not like liver… liver days were very, very bad days indeed) but I do remember that it was very pink and that struck me as being suspicious. It’s hard to imagine that for many people in WW2 these things would have been considered real culinary treats!

Has anyone in particular inspired the lovely yet heartbreaking story of Dan and Stella?

Not exactly, though as a child I was struck by how awful it must have been for my grandparents to have been separated as young newly-weds during the war. I remember my Gran telling me about it again when I was a teenager and in despair because my boyfriend had gone to work in France for the summer. She reminded me that at least we could write as much as we wanted and speak to each other every day – and that I pretty much knew he would come back safely! Her new husband was gone for a year, and she didn’t hear a word from him for most of that time, or know where he was or whether he was all right. In the agonising clutches of first love, I couldn’t begin to get my head around how heartbreaking that must have been. 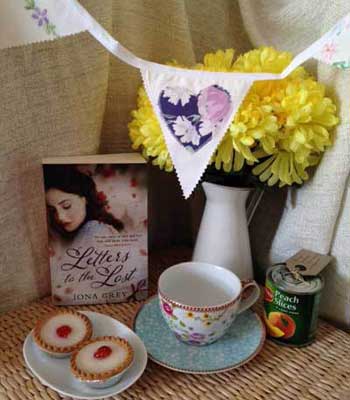 The Hamper (c) the booktrail

This needs to be a film. Who would play Dan and Stella?

Top of my list are Theo James and Jessica Brown-Findlay, but I’m a bit rubbish at translating characters in my head into real-life faces so if anyone else has any suggestions I’d love to hear them!

You evoke the sights of wartime, the music of Glen Miller, the spirit of the time…what part surprised you or you wish we did now?

The thing that surprised me most was something I’m very glad that we don’t have now, and that was the powerlessness of women; the way that the law absolutely subjugated them to their husbands. I’m not much of a planner when I’m writing so I explored the options open to Stella as I went along and was shocked to discover that they were pretty much non-existent. On a more positive note, I really admired the resourcefulness of the time. I found myself feeling full of awe and admiration for a population who were able to adapt and adjust and be creative in the face of really stringent shortages, and who appeared to have faced the challenge largely without protest.

Stella was a woman trapped in circumstance. Can you tell us more about her?

She has grown up in an institution, without a family, and spent her childhood longing for a home of her own.  She is cautious and quiet; ‘a good girl’, These qualities make her suitable for the position of housekeeper to Reverend Charles Thorne, and eventually his wife.

In the first half of the twentieth century, the family was sacrosanct. Stella has grown up outside of this hallowed unit, so has had a very idealistic view about what it would be like to belong to one. She soon discovers that it isn’t all she’d hoped it would be, and that the things she thought she wanted from marriage – security and permanence and belonging – are the very things that come to stand in the way of her happiness.

Stella’s fate must have been one shared by millions of women. The society of the time held housewives in high esteem, and made the roles of wife and mother into something women were supposed to aspire to – no one wanted to be ‘a spinster’, with all the very negative connotations that word carries, (unlike ‘bachelor’, its masculine equivalent!) – but it seems to me that the price paid for the status of marriage often amounted to the price paid by the Little Mermaid for her legs. An Englishman’s home was his castle, and when the drawbridge was pulled up he was allowed to behave pretty much as he pleased, without any fear from the law. His wife was his property.

What is the one message you hope people will take away from your novel?

It’s tempting to look at the past through rose coloured glasses, and there’s certainly so much to admire in the spirit and strength of wartime generation, but I hope the message is ultimately positive – that as a society we’ve come a long way in terms of equality and breaking down prejudices – homophobia, and the ignorance about mental health issues and learning disability – that blighted countless lives.

With huge thanks to Iona for popping over today.