We love language here. Love the idea of learning a new language or reading a book in a foreign tongue. Thank goodness there are literary translators who allow us to read books in languages we don’t speak. We’re meeting Andy Smart today and his is a unique story. English speaker by birth, he decides to move to China and learn the language. As you do. So as you can imagine we wanted to know about what drove him to do it, write a book about it and is Chinese as hard as it seems? 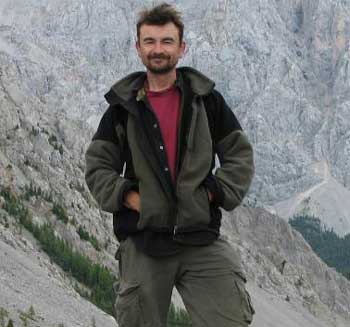 What was the reaction of people when you announced you were moving to China? Booktrail of Just Turn Left at the Mountain

I think the most common response was “Why China?” with an accompanying look of disbelief. After all, aside from the Costa del Sol, Thailand, India and Australia are the most common haunts of the British traveller. I guess that’s the main reason why I chose to go there really.

Also, how many people do you meet that say they’re going to do something and then never do it? That was the feeling I got when I told everyone my plan, that I was just one of ‘those’ people. After my initial announcement I shut up and made my preparations covertly. It was only after I bought my plane ticket that I went back to telling anyone and then reactions were markedly different.

Your courage and sense of adventure are legendary? What drives you?

Actually I am full of fear when it comes to travelling. Even now as I plan my next trip I quake months ahead of D-Day. However, for me, the need to escape the daily tread mill and that accompanying dull feeling of security gets so overwhelming there is no choice but to roll my sleeves up and go for it.

At the age of fifty it’s shocking how quickly time flies by. Time is one of our most precious finite resources that we often waste. Phew, if only we could recycle it like paper and glass and it would be happy days! I need to get on the road again as soon as possible. There’s no time to lose! 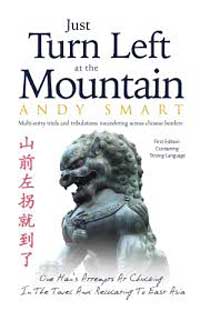 You have really integrated yourself into the language and the culture of the country. Was it hard to learn the language?

Ha ha. I wish! I blame it on many things but honestly my Chinese is terrible. I can speak basic Mandarin fluently so can get on the train, buy food and make simple conversation but that’s it. I have a wonderful super patient teacher that I see twice a week and am making progress now thank goodness. Necessity leads to progress and that’s all there is to it!

I think the hardest element of the language has to be the pronunciation. Some things take me months to get right. Chinese has four key tones so watch the look of bewilderment on a local’s face when you get one of them wrong. I mean ‘tang’ can mean ‘soup’ if it’s used with the flat first tone or ‘sugar’ if used with the upward second tone so you can confuse a waiter immediately if you’re not careful. ‘Shang chang’ means ‘shopping mall’ and ‘xiang chang’ means ‘sausage’.  ‘Aubergine’ or ‘eggplant’ translates to ‘qieze’ but can sound very similar to ‘xiezi’ or ‘shoes’ if you are a beginner so watch out what you ask for in the restaurant!

Which cultural behaviours or every day thing do you find the most strange, the most difficult to get used to? The funniest?

Because there are so many people here the perception of ‘personal space’ is completely different. Someone might be right next to you on the subway or bus on their mobile phone with their voice raised as if there’s no one else around. You do desensitise to some degree but I don’t think you ever get completely used to it.

Spoken Chinese leaves no room for mumbling. If you want to call the waiting staff over in a restaurant you have to shout ‘Fu Yuan!’ at the top of your voice to get any service. Great fun! 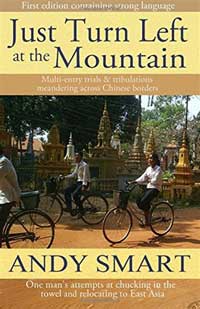 You must have made a funny mistake at some point?

I’ve always been the king of howling errors so you can take your pick really. I’m the guy who catches his coat pocket on the door handle as I leave the room or trips up a step in a public area. Even today I went out with my slippers on by accident. Here something from Just Turn Left at the Mountain as evidence of this strange ability:

So I’m in Lhasa when I go to the corner shop to buy some tissues.

“Can I have some tissues please?” I ask in English, pointing at the tissues.

“Shenme yisi?” (what does this mean) the usual response.

Getting out the sad little overworked phrasebook, I point to the correct vocabulary.

“Wo mei you” (I don’t have) the shop owner replies.

“Yao zhe ge” (want this one), I insist. Once more pointing to the tissues.

The shop owner’s friends join in and between them they get more and more animated, until after five painful minutes they reluctantly sell them to me.

“Xie xie” (thanks) I angrily snap, opening the packet in front of them to find it is really a packet of tampons.

At that they all burst out into uncontrolled laughter. Oh the shame!

Haha! And with that we leave Andy – more to come with his tales of China, but for now, we can’t talk for laughing so we’ll have to leave it there Andy! Many thanks for answering our nosy questions.