Deborah Lawrenson, author of 300 Days of Sun sends a postcard from Faro. When you think of Faro what comes to mind? Sun, sea, sand and a whole lot of relaxing on the beach? Faro has so much more to offer and it’s a world of twisty alleyways and mystery behind every corner if Deborah Lawrenson’s book is anything to go by!

Booktrail it here:  author of 300 Days of Sun 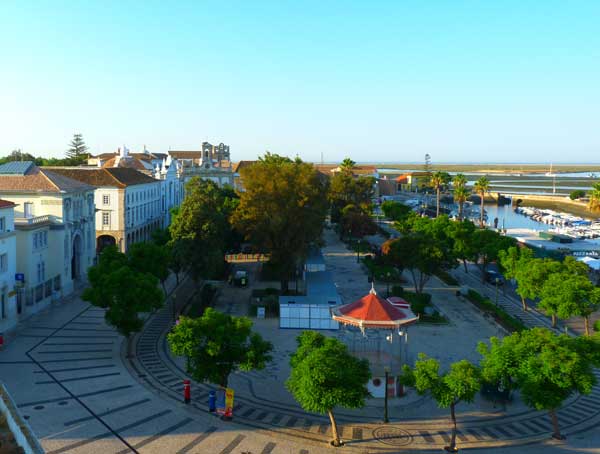 The town was full of strangers and constant movement: planes overhead, roaring in and out of the airport across the shore; boats puttering in and out of the harbour; trains sliding between the road and the sea; buses and cars; pedestrians bobbing up and down over the undulating cobblestones.

The café, at least, was still. On the way to the language school, it had the presence and quiet grace of an ancient oak, rooted to its spot in the Rua Dr. Francisco Gomes. The columns and balustrades of its once-grand fin-de-siècle façade had an air of forgotten romance that was hard to resist. I pushed against its old-style revolving door that first morning simply because I was curious to see inside.” 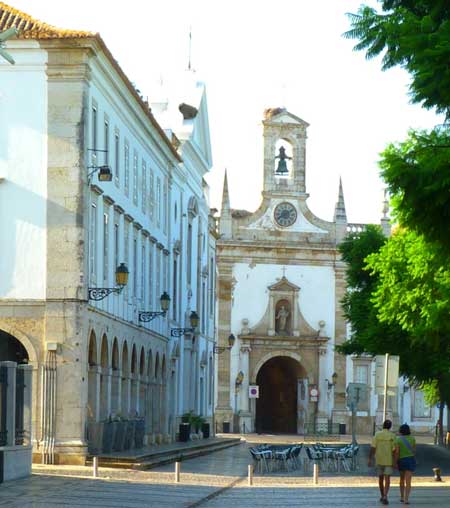 I didn’t go to Faro to research a novel. I was only there because my daughter Maddy was enrolled on a Portuguese language course. She was seventeen at the time and I couldn’t let her go to a strange town on her own for two weeks. But we both fell under its scruffy spell on our first hot August evening there.

First impressions were of fading elegance scarred by signs of hard times, graffiti and ‘closing down’ notices. Most people passed through – or avoided the town altogether – on the way to golf courses and famous rocky beaches of the Algarve coast. 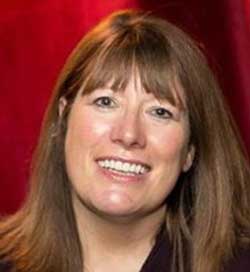 We were staying at the modern Hotel Faro, overlooking the marina. A few minutes’ walk away though a shady public garden, the Jardim Manuel Bivar, the Old Town sat above the sea like a fortress. Just around the corner was a maze of streets patterned by calҫada pavements, so that we strolled across mosaic fish and waves to get to restaurants and shops. The buildings were low-rise and many were stained, weedy and shuttered, but that only seemed to add to the charm. The locals were friendly, the food and wine delicious and cheap.

Planes flew overhead every few minutes, mostly medium-sized budget holiday airlines taking off and landing at the airport across the bay. A prominent stage had been erected on the edge of the marina for the Folk Faro festival, as the evening grew darker, groups of dancers and singers in bright national dress from many countries began to appear, then take their turn to stomp and sing. 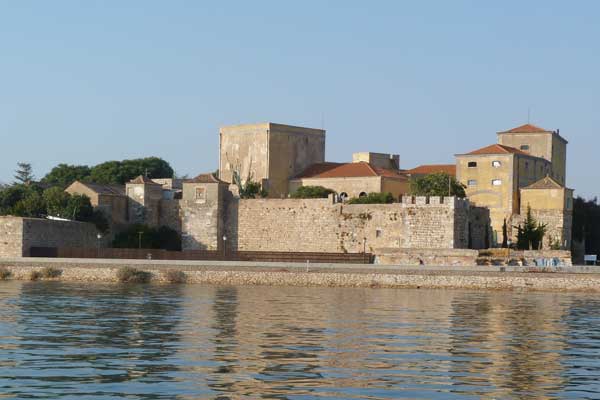 The next morning, while Maddy was at the language school, I wandered around with my camera. I walked through the gateway to the Old Town and through the narrow cobbled streets to the cathedral square, once the site of a Roman forum. Out the other side, the streets seemed deserted and led back to the sea and the green marshlands beyond. I found the jetty where the ferry boats leave for the beaches and islands.

Back in the streets behind the marina, I began to look more closely at the once-grand buildings that were now shut up, businesses closed. The most prominent of these was the Café Alianҫa and the mustard-yellow shops that adjoined it, in a prime position facing the lively marina. The sense of gentle decay was compelling, and I longed to know more. What was life really like here, behind the pretty houses covered in cracked tiles – azulejos – and crumbling stucco? 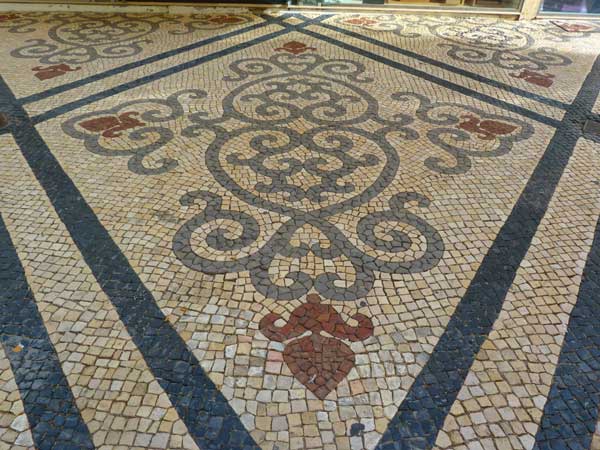 And why was grass growing from so many of the window sills and high ledges? When I realised that these shaggy tufts were birds’ nests, I stopped under one of the largest examples, on the pediment of the gateway to the Old Town, and asked someone. ‘Storks,’ he said. ‘They can return to the same nest for many years.’

After that, I started to go out with a notebook as well as a camera. Readers tell me that my novels have a powerful sense of place, and that is achieved by close observation. I’ve always been an observer of the quirky as well as the quintessential, and I simply write down what I see – on the spot, if possible. All the descriptions in 300 Days of Sun come from jottings in that notebook. 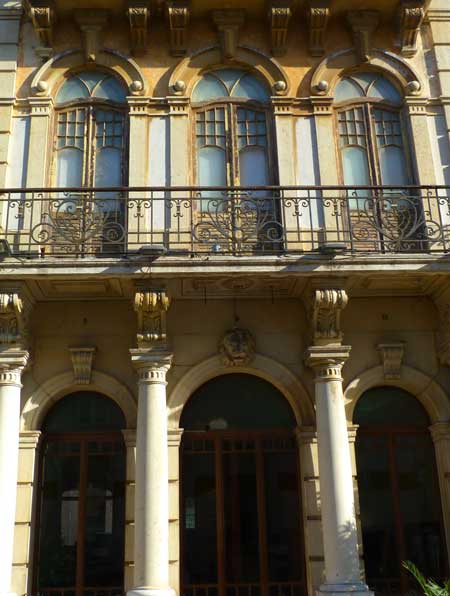 The Café Alianҫa, I discovered was once the grandest, most cosmopolitan café on the Algarve, visited by Simone de Beauvoir in 1945. At the time I was there, it had been closed for several years, still elegant, but sad and neglected. As in the book, the ground floor was being used for public discussions as part of a local election campaign.

I already knew about Portugal’s history during the Second World War and Faro inspired me to find out how I could bring both this setting and the history together in one story. Lisbon, as the capital of a neutral country, was a crucial wartime espionage hub where the Allies and the Nazis lived side by side while their opposing armies fought ferociously elsewhere in Europe. But as Portugal was a free country, it was possible for these foreign visitors to travel south. An idea for a novel was forming, impossible to resist…

In the afternoons, Maddy and I took the open double-decker ferries that ploughed through channels between green salt marshes of the Ria Formosa to the outer islands and sun-blasted beaches. Clam diggers and fishermen bent over boats and buckets; hard, gruelling work. Storks and other wading birds dug for food alongside. 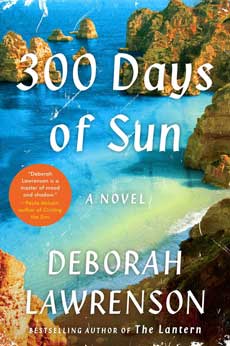 The sea marshes became the metaphor for one of the main themes of the novel: the process of change. All the characters in the story experience life-altering change – and the world around them is unstable, too. War and economic and political power-shifts undermine the individual. Violent storms re-draw coastal geography. Nature cannot be contained even with modern sea-barrier engineering that is supposed to keep the islands and marshes stable where the forces of the Atlantic and the Mediterranean meet.

This novel has several different genre elements: part historical fiction, part romantic suspense, part literary thriller. I wanted to use the contrast between the sunny, holiday side of the Algarve – with its three hundred days of sun a year – and a darker past that could still impact on the present. I always try to write in a way that transports the reader to a setting, capturing a vivid sense of place and I research carefully to make the imaginary experience as accurate as possible, evoking the smells as well as the sights, or the soft shushing sounds of the Portuguese language.

The great news is that a few months ago, the wonderful old Café Alianҫa reopened after a fabulous refurbishment in keeping with its fin-de-siècle origins. I can’t wait to see it again, this time in all its glory.(No website as yet so the link takes you to a few reviews)