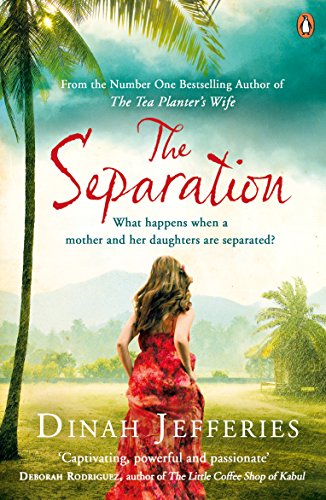 1950s: Stunning in its evocative detail, shocking for the sad events which take place and heartwarming for the innocents caught up in the whole affair.

Imagine for one moment that as a mother you return home to find your husband and children missing. You are on your own and have no idea where they could have gone – not only that, but the servants have gone and the phone is dead.

Now imagine that you are an expat wife and your house in in the middle of the Malayan jungle, you are there as your husband has been posted there for work for the British Administration in Malaya. It’s the 1950s and the country is at war. It is a tense and steamy atmosphere there – the jungle is full of hidden dangers and it’s up to you to find out just what on earth is going on. Where are your children? Now can you imagine?

Malaya in 1955 is a frightening and dangerous place to be.

In order to find her girls, Lydia, sets out on a nightmare journey to find her husband – she finds out from his ‘boss’ that he has been posted up country but her struggle to get there is fraught with danger  – not only in there the fact that an attack by guerrillas is ever present – but a white woman travelling alone in the jungle is perhaps even more so.

This is going to be no ordinary journey – the challenges of the heat for one is unbearable and the constant and utter paralyzing confusion as to what this poor woman can do.

Added to her grief, a malayan woman in a village asks her to take her child with her – she wants him to escape with her and take her to a resettlement village. The two become unwitting travelling companions in search of answers..

The heat, the anguish the utter hell on earth…

“This was not how she expected Malaya to be. Alex hadn’t mentioned  the endless battle against humming birds mosquitoes, nor the wet heat, which approached like a solid wall – nor the war they called the Emergency”

It’s not just Lydia’s voice that we hear however. At the same time as we panic with Lydia, we cry at the injustice of a confused little girl, Emma, trying to make sense of why mummy is not with them. What is daddy not saying? Why are they travelling so far away? why are the travelling to England? Emma is afraid – (the stories of what she hears and remembers are Malaysian children’s tales and are listed at the back of the book)

The whole country is being  torn apart by rebels, Lydia is running out of money and hope. Meanwhile Emma is trying to settle in in England. But the two far apart are in danger and an escalating situation that neither of them could have imagined. And what they do when things implode will be the test of them all.

There’s nothing left for the Chinese in Malaya,’ he said. Only the camps or the horror of living on the inside.

A very fine, poignant novel, with the heartbreak of a mother searching for answers. A n exotic setting with fear and  danger at its core. All in all, this is a journey to Malaya and a very fine debut full of authenticity and a level of evocative descriptions not seen before.

The history of Malaysia is where the novel excels – I knew nothing of what the time of ‘The Emergency’ was like and now I feel I at least can imagine what it must have been like for a woman fearing the changes in a country. Details and background are never over done – only snippets given here and there to mirror the confusion of those at the heart of it.

The Separation is essentially a story about the strong bond between mother and children. The two voices tell of separate yet interweaving fates and we learn from Emma things that we wish we could shout out so that Lydia might find out. Scenes set in England are cold and lonely – in direct comparison with the humidity and stress of Malaya -effective and a real emotional pull.  Given the setting and the background, the separation takes on a whole new meaning. It gives the novel an added layer of heart and soul.

This will stay with you long after you have turned the last page.