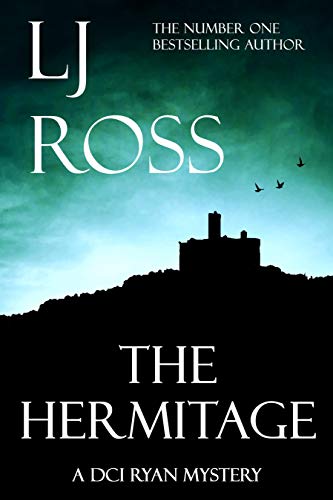 When an old man is found dead inside the ancient hermitage at Warkworth Castle, Northumbria CID are called in to investigate. With no apparent motive, it’s their job to unravel why he was murdered – and this time they’re forced to do it without their star detective…

DCI Ryan is thousands of miles away. He’s tracked a killer across Europe and has sworn not to return until he has his man in custody. Nathan Armstrong is a dangerous psychopath but there’s just one problem – he’s also an international celebrity; a world-famous thriller writer with money and connections.

Ryan is a stranger in a foreign land, but he knows one thing – he’ll never give up.

Ryan’s Guide to Northumberland and Florence

Northumberland is the home turf for Ryan and his wife. The book opens here at the stunning Warkworth Castle and the Hermitage of the title. A man has been found murdered, someone who worked rowing boats and tourists across the waters. The area is evoked with style. Gothic, imposing, the Northumberland sky lighting it up at night like a gothic canvas.

Just down the road is the lovely little village of Amble and the nearest place for the RNLI to come to the rescue. Amble is also good for fish and chips fyi.

Given the past case of when the bridges were targeted by terrorists, the police follow a lead and take time to see how the city is coping and mending itself.

And then it’s off to Florence! Louise studied here during her time of being a lawyer so there is a lot of lovely detail involving vespas, ice creams and villas on a hill…

Piazza di Santa Trinita is where Magda and Anna go to meet someone where they chat about a case.  Good coffee here it would seem. Ice creams are recommended in the  Piazza Santa Croce so it would be advised to go to both places to see for yourself. Research is important 😉

The fictional villa might not be so fictional after all. Take yourself to the curvy and very leafy Via Machiavelli to see the stunning buildings. And then imagine Ryan chasing the next clue from the tall, iron-wrought gates. Very nice.

This is  the setting for various scenes as a big event is taking place here during the novel. In real life, it’s a big 16th-century building housing vast collection of Primitive & Renaissance paintings & masterpieces. Imagine the masked ball taking place here like in the novel?

Palazzo Russo – fictional but based on similar buildings which have been renovated and changed into apartments.

A) North East England - Northumberland - The Hermitage
I) Italy - Florence

There’s something very special when a detective leaves his or hers home turf and flies half way across the world to investigate someone…Ryan and Anna are off to Florence and it’s a world away from Northumberland but really allows us to see a new and different side to the characters. Anna in particular made me laugh and high-five myself with the attitude she has here. Ryan is out investigating so she isn’t going to sit in the house, even if it is a villa!

I SO wanted to live in this fictional villa. It’s pretty darn special. Anna is impressed and so was I! There’s not much time for cocktails on the terrace however before the reason they’ve come here  kicks off and all hell breaks loose. The city of Florence is brought to life with startling quality from the cobbled streets, vespas, ice creams and coffee. There’s  lot of lovely mentions of sites, impressive buildings and a little bit of history sprinkled through the text which really helps to picture things. First time there for Anna so as well as work, they to are discovering the city when they have time.

The Uffizi Galllery is an impressive venue anytime but as a setting for a crime investigation, it really comes unto its own. I was fascinated learning more about the history and status of this gallery. And the setting worked well for this investigation. Ryan and Anna are out of place in one way and doesn’t the Italian police let them know! But it allows their characters to develop and shine on another level.

Don’t think that Northumberland is left out. There’s enough Northern heritage here to keep fans happy. And just think – Ryan’s away for now – so when the cat’s away, those police mice play! Some very funny scenes here.

So, The Hermitage?  Don’t be a hermit – get outside and buy this book!