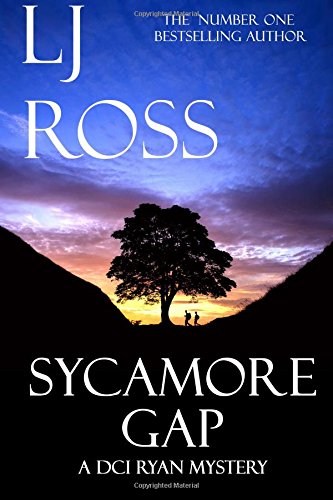 CDI Ryan believes he has put the history of the last few months  behind him. Six Months ago he found himself on Holy Island with the vestiges of paganism and murder all around him. Now, a body has been found inside Hadrian’s Wall in Northumberland and apparently has been there for ten years or more.

How and why did this woman end up in the wall and what is the significance of the find? It was found during the time of the summer solstice so could there be spiritual and mysterious reasons at stake? DCI Ryan is on the case but he has many demons to cross including his own and a killer who seems hell bent on a deadly game of cat and mouse.

Travel around Northumberland and Sycamore Gap with DCI Ryan

Sycamore Gap is a very real and iconic part of the Roman Wall in Northumberland. The tree on the cover is the iconic tree featured in many photos, films and even Robin Hood. A popular place to visit for many, this is now the scene of a crime and what a crime it turns out to be. In the wilds of nowhere, history comes back to life and it’s deadly.

This is a barren and remote land, an unforgiving landscape where paganism is rife and old customs still hold sway. The Circle, that malevolent society which featured in book one is alive and well. The idea that witches and similar people with mythical beliefs are hidden in plain sight makes this a setting of fear and fascination all at once.

DCI Ryan and Anna investigate the scene and the subsequent mysteries whilst their relationship develops – and it’s this interaction and different ways of working that really puts a unique spin on a unique case in a unique setting!

Underneath the dark sky and sheltered from the chilling winds high up on the Northumberland hills, DCI’s bright ties and acerbic wit is the only thing you need to keep you warm.