Paths of the Dead (Rhona MacLeod 9) 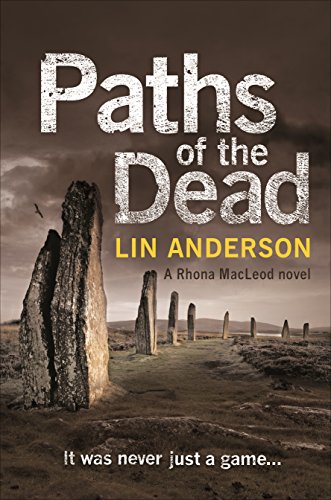 Amy MacKenzie agrees to attend a meeting at a local spiritualist church, the last person she expects to hear calling to her from beyond the grave is her son. Especially when she’d only spoken to him, alive,  an hour before.

Then the body of a young man is found inside a neolithic stone circle high above the city of Glasgow.  The hands have been severed and there is a stone in the victim’s mouth with the number five scratched on it.

DI Michael McNab is certain it’s a gangland murder, but Rhona MacLeod isn’t convinced. But then a second body is found in similar circumstances, a pattern begins to emerge, of a killer intent on masterminding a gruesome Druidic game that everyone will be forced to play .

The Stones –  “The right hand lay a top the eastern stone, the left hand on the western side Rhoda circled the stones, using the metal treads laid down on the grass, overseeing the body from all directions”

“Stromness was a long town, traversed by a narrow street that weaved it ways along the shoreline. On the seaward edge, fisher houses stood side on , each with their very own jetty”

“Stromness was also known by it older name of Hamnavoe….”