No Place For A Lady 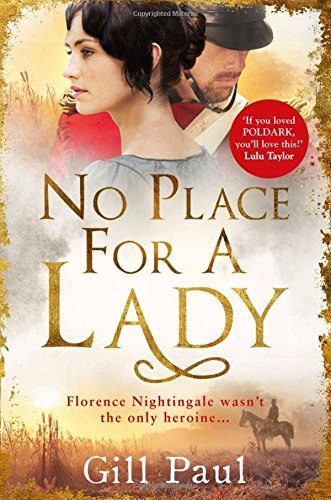 1850s – Two sisters follow their heroine Florence Nightingale over to the Crimea to do their bit for King and country. But neither of them could have foreseen what lay ahead

In 1854, England is in the grip of a war that will change the lives of many for ever.
Two sisters Lucy and Dorothea fall out when Lucy marries an officer and elopes to the Crimea with him, but this doesn’t stop Dorothea missing her so much she decides to follow her. As a volunteer nurse at London’s Westminster Hospital, she decides she’ll go to the front to help whilst looking for her sister. Her heroine Florence Nightingale is there and Dorothea hopes she can play her part.
But actually being in Crimea is very different to the image of war at home and their time there will be fraught with the danger of the unknown and the possibility that they will never seen each other again.

The Crimean war is vividly and emotionally brought back to life through the highly evocative words of MsGill Paul. The story is a remarkable one set against a real historical period with many historical characters together with two sisters who show two sides of the same war.

Lucy’s journey of elopement is fraught with danger – she marries in haste and we follow her through cities such as Constantinople as she gets ever closer to the battlefield.

Hers is a struggle to survive –

“Conditions just continued to deteriorate with each day bringing some fresh challenge.”

Dorothea’s work as a nurse is fascinating for the level of detail revealed about the medical establishment at the time. The medical beliefs which seem so obvious to us now were just starting to become accepted – it was just being realised that cleanliness did prevent many illnesses and stop others from getting worse.

Within the hot and chaotic Crimean hospital, Dorothea is thrust into working alongside Florence Nightingale and Mary Secole in the filthy freezing camps, where the battle between chaos and death is graphically described –

“Huge number of shells rained down, filling the air with smoke and thunder and everyone at Castle Hospital braced themselves to receive trainloads of wounded”

Florence Nightingale  and Mary Secole have fascinating stories in their own right – (Mary set up her own convalescent “British Hotel” after being refused by the War Office when she asked if she could help) The shocking state of their understaffed and overly stretched hospitals constraints with the admirable work these nurses do.
This world in which Dorothea now works is a bloody landscape of pain and death, battles and ordeals of many kinds.

The bleak landscape of the Crimea where the British are engaged in a war with the Russians about territory there is a vivid and painstakingly researched account of a war from the viewpoint of the women at the centre of it all.

The historical note and photos at the end of the book were a fascinating addition which helped explain and add context to the story.