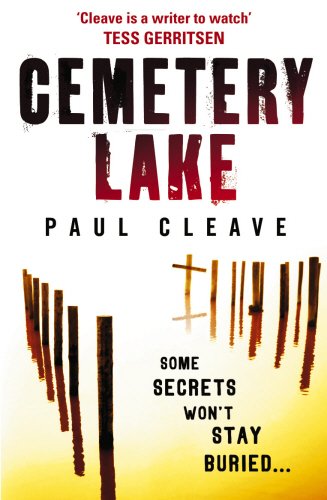 In a cold and rainy graveyard, Private Detective Theodore Tate is overseeing an exhumation which should be somewhat of a routine job for the weathered former cop. But there are doubts as to the body in the coffin and so the case takes on a grim and sinister turn. This is not really Tate’s job to investigate, really he should hand it over to the police but something tells him to carry on.

Tate knows about deep dark secrets – he has a few of those himself. But the problem with buried secrets is that they often come to the surface and have to be faced.

The lake like the grisly mystery unfolding is dark, deep and who knows what lies beneath?

Cemeteries are not the most jolly of settings at the best of times but this one is grimmer than most. A body exhumed to determine the cause of death turns out  a case of mistaken identity when the coffin in question contains the body not of a man but of a young girl.

The cemetery is cold, rainy and desolate to the extreme. The nearby lake is eerie and has a few secrets of its own –

“The nearby trees are thick oaks that creak loudly and drop acorns around the  gravestones. They hit the cement markers, sounding like bones of the dead tapping out an SOS. The air is cold and clammy like a morgue”

When the first body comes to the surface in the lake which ‘ releases its hod on the past’ the scene becomes even creepier and dark.

The bodies are clues to the past and Theo realises that something from his past may have prevented some of these murders. Talks with the priest come to nothing however due to the priest not being able to break the confessional and the walls close in on the mystery and Theo’s own violent past.

The sense of the cemetery, bodies being found, bodies being swapped is a grisly premise and one which takes you to a dark and desolate place. The cold grey stone, the cold dark waters of the lake and the misty dark atmosphere are evoked so vividly you can feel the chill on the back of your neck.