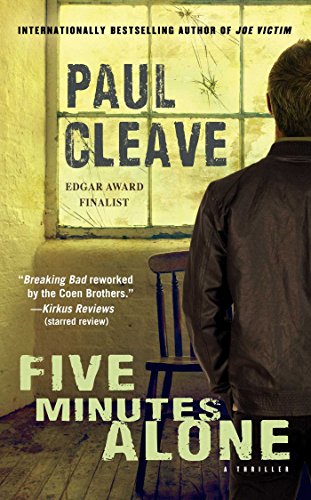 2000s: Christchurch is never quite the place  you imagine it to be in the hands of Paul Cleave….here someone is helping rape victims get their revenge…

Five minutes alone refers to the haunting plea police get from the families of rape victims. “Just give me five minutes alone with him” is the most common cry from the victims loved ones. Now someone in Christchurch is helping them do just that. Many people even though know this is wrong, are sympathetic to the killer and even some of the police seem to be rooting for him
Killings continue but then things take a different turn when innocent people are getting injured and killed.

The two men on the case are known as the Coma Cops for one has a bullet in his brain after a shooting six months previously and now has few emotions. the other is getting his life back together.

Soon the two will be caught up in a battle of wills with the killer and with each other..

If you’ve read the first three in the Theodore Tate series, you’ll know that Christchurch is a chaotic, disturbed yet utterly fascinating hellhole – or at least just in these novels as on the author’s website, he is at pains to point out that fiction an reality are not always thankfully the same.

The view this novel does give of the city however is one you’’ll  be grateful you only visited in fiction. –

The two coma cops revisit their haunting memories as they investigate the case, Tate for one has to go back and reconsider the decision he made when his daughter was killed by a drunk driver and his wife seriously injured.  Wanting to turn back the clock, or have five minutes to put things right is a raw and emotive place to be –

“My wife wakes up into the morning of the accident. She thinks that everything is as it was three years ago. It’s the school holidays and she’s taking Emily to the movies and Schroder is my partner and the world, to her, hasn’t moved on.”

Carl’s brain injury causes him problems in the every day and more than clouds his judgement and emotions. He sees the five minute argument as valid since those who rape and kill get to live their lives whilst their victims and their families do not.

The journey between right and wrong and if killing can ever be justified is the harsh and gripping landscape here.