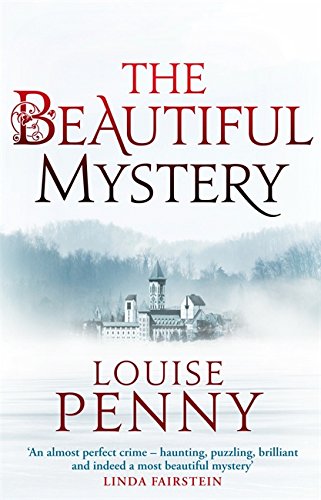 A story of a remote and secretive monastery in Quebec – closed off from the world and tucked away. No-one goes in and no-one comes out. Until there is a murder. And the murderer is one of their own.

Set in the wilderness of Quebec at the fictional monastery Saint-Gilbert-Entre les-Loups – ‘Saint Gilbert among the wolves’? which is  said to be based on a real monastery near the writer’s  home in Quebec. And the Gilbertines – an order of monks who existed but who went extinct are thought to be the inspiration for the monks in the book.

So, a mixture of fact, fiction and a great deal of intrigue…. Won’t you step inside?

You will  at first be amazed by what you see – for these monks are devoted to Gregorian chant. This ancient chants become known as the beautiful mystery as the monks believed they were singing the words of god in the calm and reassuring voice of God. We learn of the amazing Gregorian chants and how the first written music came about (with lines drawn above words to denote rises and falling sounds – and how these became neumes) and how these chants were fought over and became a war between the Church all over the world –

“Volleys of plainsong were hurled between the Benedictine monastery of Solesmes and the Vatican. Each insisting that theirs was closer to the original and therefore, loser to the Device.”

Choosing sides in the escalating battle that soon became more about power and influence and less about simple voices raised to the glory of God.

Quebec and its monastery comes alive with the rich use of language, and the slow careful unveiling of the mystery  through the author’s capable hands. She weaves us through a wild and inhospitable stone corridors, hidden caverns and secret gardens.

“That’s what the abbey of Saint-Gilbert -Entre-Les Loups felt like. A place of distortion and even deprivation. Of great silence and  greater darkness.Where whispers became shouts. Where monks murdered and the natural world was locked out as if at fault.”

Nothing and no-one at the monastery is what they seem – for this secret, forgotten and hidden community has some dark dark and haunting secrets where power, tradition and solitude are challenged, and what lies beneath the cool calm surface is often that which we should fear the most.

1) Quebec - Abbey of Saint-Benoit-du-Lac
We image this is what the fictional monastery looks like
2) Montreal - Rue St Denis
Gamache goes to this street from Annie's apartment.

This is one of my favourite Gamache novels for the sheer unique location and locked room mystery. The setting of the monastery is mysterious and cold even before the dark heavy wooden doors open. The entire atmosphere in the monastery, the work and daily rituals of the monks, the police who are unwelcome as outsiders coming in and asking questions…

Louise Penny’s words described the monastic life in such detail you could feel the chill of the stone walls on your skin, hear the glorious chants echoing from its walls and smell the burning candles dotted around the cloister.

Inspector Armand Gamache and Jean-Guy Beauvoir are called into this cloistered community to find the murderer. These two officers have been the central figures in other novels too but this one really reveals some of the inner workings of the police.

I love the novels set in Three Pines but this was a nice move away and development for Gamache!