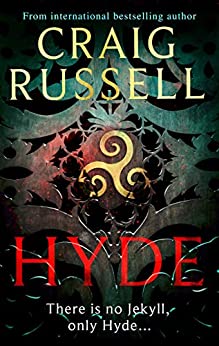 1886: The story of how the novel Jekyll and Hyde came to be.

Edward Hyde has a strange gift-or a curse-he keeps secret from all but his physician. He experiences two realities, one real, the other a dreamworld state brought on by a neurological condition.

When murders in Victorian Edinburgh echo the ancient Celtic threefold death ritual, Captain Edward Hyde hunts for those responsible. In the process he becomes entangled in a web of Celticist occultism and dark scheming by powerful figures. The answers are there to be found, not just in the real world but in the sinister symbolism of Edward Hyde’s otherworld.

He must find the killer, or lose his mind.

The Edinburgh of Jekyll and Hyde

The story is set in Victorian Edinburgh, which is carefully and brilliantly recreated on the page The fog, mist, gothic streets, dark shadows and ghostly whispers are all  detailed and evoked with style. You will believe you are there.

The novel is also littered with Celtic folklore and Scottish myths and legends. One of these is the story of Deacon Brodie,  man with two personalities.

William /Deacon Brodie, was a Scottish cabinet-maker and deacon of a trades guild, and Edinburgh city councillor, who maintained a secret life as a housebreaker, partly for the thrill, and partly to fund his gambling.

The novel explores that legend and builds upon it. Much of the novel takes place at the Waters of Leith which in the novel is ana rea of poverty and crime. This is where Hyde hears a banshee cry . It’s also the scene of a gruesome 3 fold death at the Waters of Leith, a man hanged upside down, drowned and with his heart removed. 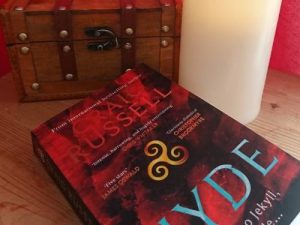 Well this was just brilliant. Hyde sits down with a certain Robert Louis Stephenson and tells him a story ….
A light bulb goes on above Stephenson’s head
This novel is that story
The rest is history.

You know when you feel that you’ve witnessed a real pinch me moment! I love the classic novel Jekyll and Hyde and to be there at the moment when RLS could have got the idea…Well, that is my kind of novel.

Detailed and dark, this novel is worthy of awards and high recommendations. Craig recreates a stunningly realistic gothic Edinburgh. The dark shadows, fog, danger and gothic overtones are just wonderfully done and the entire novel was just so cinematic. I would love to watch this on the big screen. If it’s half as good as the version that played out in my mind, then you’re on to a winner!

The novel explores one of the most iconic figures in literature. Mr Hyde. What does it mean to have two minds and is it even possible? How can one man have two personalities when one doesn’t know what the other one is doing? This is a classic exploration of the issues in the original novel but it’s also a reflection of how mental health and memory etc were viewed at the time. The interest in psychology and the mind is a large part of the novel and it’s just fascinating.

What I also enjoyed was the amount of history and historical background that the author wove into the plot. You feel and hear the events of history, see people who really walked these streets and real people of the time mixed with fictional ones. I love this kind of mix!

There are some gothic and very gory crime scenes here so beware of that. The Edinburgh that Hyde inhabits is one of full of filth, satanic worship and goodness knows what else. What a treat to be there though! From the safety of my book of course.