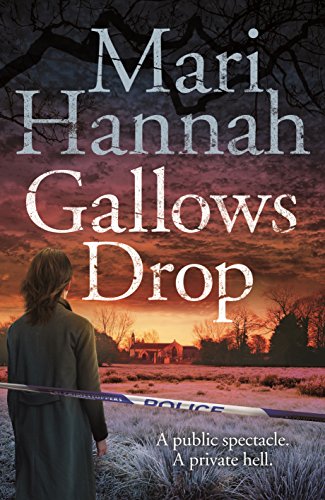 2000s: Kate Daniels’ most unsettling and personal case yet.

Dawn is just breaking and the mood is peaceful and serene. Apart from the body hanging from an ancient gallows at the side of a country road. Only hours earlier, a country show had brought lots of people to the area, but the countryside is now a crime scene.

DCI Kate Daniels is due to go on leave any day now, but she heads out to the scene and what she sees chills her to the core – she’s sure she’s seen the victim alive only hours earlier.

DCI Atkins is due to take the case over but there is a lot of bad blood between these two and this is not ging to be an easy handover. Particularly when Kate discovers that Atkins’ daughter was an eyewitness to a fight involving the victim.

Atkins believes Kate is stepping on his toes, it’s his case and he’s going to do what ever it takes to claim it back, even if that means destroying Kate in the meantime.

There is a noose around more than one person’s neck..

The dawn breaking over an ethereal morning in Northumberland is something Kate Daniels enjoys on one of her many bike rides, as a break from her busy Newcastle life.

A hanging on a historical gibbet is both eerie and chilling given the positioning of the body and the significance of the act. Hanging is symbolic. There is a grave historical precedent and landmark:

“In the eighteenth century, the body of Thomas Winter was hung there, within sight of his crime, having been hanged proper at the Westgate in Newcastle. He’d murdered a local woman, Margaret Crozier, who lived at the Raw Pele tower close to Elsdon”

The incident room is set up at Morpeth police station and the investigation is fraught with  stories which don’t add up. A police officer’s daughter seemingly involved in the fight with the victim before his death…. The police team are brought in from Newcastle.

Border Reivers country is a vast area between England and Scotland and is also historically interesting. Border Reivers were raiders who from the late 13th century to the beginning of the 17th century who were both English and Scottish but would  raid without regard to their victims’ nationality. This is where Beth Atkins lives and drives – like most youngsters who live out here a car is essential. As is mobile phone coverage.

A hanging on an ancient gibbet in Northumberland provides one chilling case for Kate Daniels. Her toughest case yet.

I can honestly say that this is my favourite Kate Daniels novel so far. For many reasons – the premise of the crime is grim and unique, the characters really come to the fore and Kate’s past and her position in the police force is examined like never before. This is Kate in her finest hour – I actually cheered for her on more than one occasion. I even high fived Hank. I felt even more part of the team than I have done and boy was I bereft when the book came to an end.

Talking about that end – I was just about calming down after recent events and thought my heart beat was back to normal, when one line. ONE LINE brought it sky high again. Oh my god Mari! How am I going to wait for book 7. How could you do this to me? I am utterly shocked and did not see that coming. Bloody brilliant! High five to you too.

The Northumberland setting also comes into its own here and I was fascinated by the historical aspect of it and it was really unique to be able to mix history and heritage into a gripping crime plot like this. Mari Hannah knows and loves Northumberland and puts a very unique part of its past on the literary map here. Northumberland shines and what a visit north it is!

This book just shines on so many levels  – regular faces are back – Jo and Fiona so personal trauma is a key part of Kate’s story here, but the biggest obstacle for Kate is Atkins. Is it possible to want to thump a literary character? I do not like this man one bit. But what a role he and his daughter Beth play here.

And can I just say something for the dialogue? Haha brilliant one lines, cracking North East humour and a warmth and charming cheek to it which just gets better with every book. I so want to meet up with Mari and see what happens when I ask for a Pina Colada..