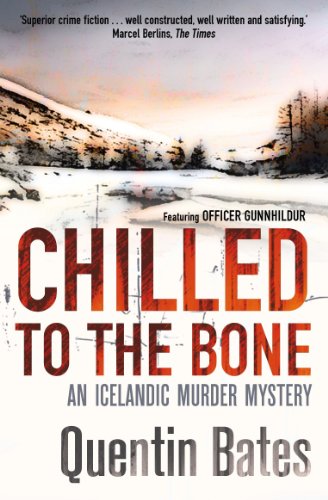 2000s: Rekjavik is a unique and exciting backdrop to a chilling thriller

When a shipowner is found dead, tied to a bed in one of Reykjavik’s smartest hotels, sergeant Gunnhildur Gisladottir of the city police force sees no evidence of foul play but still suspects things are not as cut and dried as they seem. And as she investigates the shipowner’s untimely – and embarrassing – demise, she stumbles across a discreet bondage society whose members are being systematically exploited and blackmailed.

But how does all this connect to a local gangster recently returned to Iceland after many years abroad, and the unfortunate loss of a government laptop containing sensitive data about various members of the ruling party?

On his website, Quentin Bates provides us with a full itinerary of where to go to get into the novel even more!
1. Harbourside hotel

There are several hotels actually located along the city’s sea front and this is certainly the place to go to find the inspiration and the setting for the novel – the Arctic Comfort hotel and the Harbourside are fictional yet real ones have very similar names!

It’s a lovely calm place to walk, and where much of the novel is set and inspired by –  The Old Harbour area is where the majority of marine activities take place. it’s also home to the excellent Víkin Maritime Museum and the Icelandair Hotel Reykjavík Marina. Get the feel of the place and its past right here!

The waterfall is not to be missed! The Geyer too is out of this world – literarally!

Gullfoss is incredible! You can’t see it from the road, it’s only when you get out of the car and walk towards it that you will see it! It is the highlight of the Golden Circle and well worth the drive. A friend promises me that it is the one featured in the opening sequence to the film Prometheus!

A Scandinavian crime fiction novel written by an English author. Now this is no ordinary English author however as he lived many years in Iceland, married a woman there and had a family. This is  a man with a unique view on the country from the outside and from the inside but with foreign eyes. And that makes for quite a unique premise for this Icelandic series.

It’s obvious that Quentin has been there and spent time there and got to know the people and the culture that he’s part of.

Gunnhildur Gisladottir as the main character was very interesting – if you excuse the pun, she doesn’t take any prisoners – does she? She’s like a dog with a bone who doesn’t let go and takes to digging in places that no one else might have thought of.  Especially as she is the creation of a man, I think she becomes even more interesting as she seems very real and very part of the Iceland environment.

The book also deals with a range of social problems and we get to see the issues of  illegal immigration from Eastern Europe in this book and all of the issues such as drugs and violence that result from this.

Dark and very atmospheric installment number in the series. This was the first one I read and it certainly stands alone. Makes you want to look up the earlier two though!