A Week In Paris 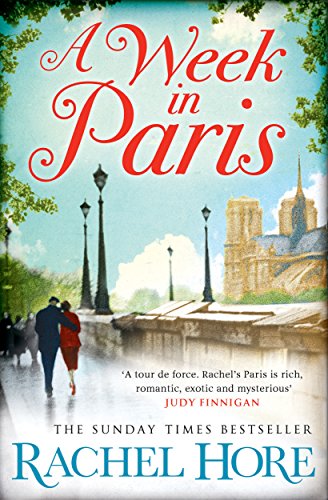 WW2: The streets of Paris hide a dark past. This is an historical walk through the streets of the city of light

Fay Knox is a talented violinist who is excited to  arrive in Paris for an orchestra tour. She starts having moments of déjà vu despite never having been there before. However her mother gives her an old rucksack which will help her to find things out about her past. Kitty, Fay’s mother studied music in the Conservatoire in Paris many years earlier and her story will involve what went on during the occupation of France. Paris has secrets to tell Fay and it is her task now to try and coax them out.

However, some secrets are harder to bear than others and some are very difficult to hear not to mention live with afterwards.

This is a multilayered Paris that is both fascinating and heartbreaking to explore. The changes from a city of light and innocence to one of fear and suspicion is deftly handled and the people so real that you can feel their concerns and see the worry on their faces.

The innocence and impending doom of 1930s Paris is captured so well by Rachel as is the city of the 1960s when Fay comes to unravel the past. Notre Dame, the Champs Elysees and the famous cafe of artists Les Deux Magots is mentioned when Fay has a drink there with a friend.

The role Paris played in the occupation – what it meant to live in fear, to be Jewish and to try and live under the German radar is poignantly explored. The places of internment in the city and the transportation of people from the the city’s train stations. People were also taken out to Vittel in North Eastern France.

Another historical event – that of the Algerian conflict which came to a head in 1961 is also explored. A plaque in memory of those Algerians killed during the peaceful protests of that year can be found on the Pont St Michel.

There are few books which intrigue me and move me so much as this one did. I had read little of the history of the occupation and of the Algerian war but I now feel that I have been at the side of those who lived through it. There is one moment that I actually stopped as once I realised what had happened – how events so innocent in nature can have such horrific consequences during war time, then the tears came. This is no overreaction. This is not the only moment – there is another one which changes the course of the story for one of the characters but no spoilers here – you have to discover this for yourself to realise the shock and twists that must have been the norm for these people.

Rachel Hore has brought Paris to life during this time and I’m not sure if its because its in a city I know and love so well, but I felt as if I was going back to see and experience its history.

the horror of war on the battle fields is raw enough but its always the effects of war on the innocent people just trying to get on with their lives that affects me the most. For Fay to discover what she did – I just don’t know what that would feel like.

The dual time line works very well as I felt I was sitting by the fire with Fay and Mme Ramond as they talked about the past. And then it was as if a mist covered the page and I was back in 1937..

The theme of friendship is strong in Kitty’s story and the bond of friendship under such hard times must have been imperative. The decision she and other people made in the moment has repercussions on the future and this is what Fay myst now deal with. Hers is not the story she thought it was.

The novel makes you think  – what would you have done? What do you think you would have done?

Against such a realistic and well researched background, Rachel puts you right at the side of her characters and tugs at both your heartstrings and your own conscience.