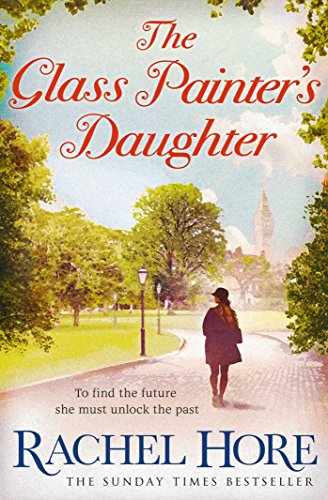 1870s, 1930s, 1993: Ever looked at a stained glass window and wondered about the story behind it, how it was made and how it came to be? One woman is about to find out how the past and present can both be reflected in one.

In a tiny stained-glass shop  – Minster Glass – tucked away in the backstreets of Westminster, Fran Morrison, a classical musician, has returned to her family home as her father Edward is very ill. She takes her father’s place, keen to see the shop survive. The first commission is one to restore a shattered glass picture of an exquisite angel belonging to a local church. Together with local craftsman Zac, they reassemble the dazzling shards of coloured glass but as the glass image unfolds, so too does a story of love and mystery buried deep in the past. Fran also finds that the threads of the past can also be reflected in the present and soon both sides of the window come together to show a story of love struggle, forbidden dreams and secrets from long ago.

Minster Glass, an old and traditional shop in the heart of Westminster is where Fran returns and loves for the mysteries it solves and the piece of the puzzles it puts back together. It’s here where we learn the art of stained glass, the meaning behind it and the significance of certain themes – angels being the one here.

A Victorian stained glass shop, with bay windows and a tiled porch..

“Every spare nook and cranny was crammed with stuff; books, boxes , files and papers, together representing the entire history of Minster Glass”

“Remnants of an antique church window have been damaged by a bomb blast in the war and now uncovered by the local vicar. The task of restoration is not one completely tied to the window however as Fran must also mend the relationship she has with her father. However the image of the angel in the window starts to form….”

Laura Brownlow, a minister’s daughter, is the writer of the Victorian Diary which Fran finds and through her, the story of how the window came to be comes through piece by piece. A memorial to her younger sister created by artist Philip Russell. However these were times when people had reasons of their own to sabotage a creation which depicted religious themes and the angel is not safe. The fact that an artist and minsters daughter should be meeting and talking was deemed a scandal.

The art and craft of stained glass making is a jewel of a find in a novel and once richly explored,. The novel is pieced together bit by bit as is the window and by the end the window is as vivid as you could imagine – and the art involved in its creatin is fascinating –

“He was at the painting stage now,which involved great delicacy, tracing the main drawing lines on the new pieces of glass and retouching some of the old in paint made with iron oxide and powered glass”

As well as the windows, the novel is awash with choir music and Victorian Gothic church architecture, with the Victorian high church Oxford Movement being a particular  theme.

A lovely premise to see the past and present through a stained glass window and to see the stories on both sides of the window come together as they do.

I had no idea about how windows were made and the craftsmanship involved. I love d spending time with the characters and Fran was a multilayered character with a lot of baggage of her own. but as she unfolded Laura’s story from the past, she became more rounded and even more interesting.

The place and setting of the novel was glorious as I was entrached by being in that shop, attending choir rehearsals and seeing Fran’s story unfold. The mystery of the window was very well done and Laura’s story was perhaps the most interesting with the role of women and the role of religion examined as the window was created.

I always enjoy the writing of Rachel Hore as once again she has immersed me in a story of past and present mixed.

The angel quotes dotted around the novel really enhance the mood and magic of the whole novel.

“Beside each man who’s born on earth, a guardian angel takes his stand to take him through life’s mysteries”