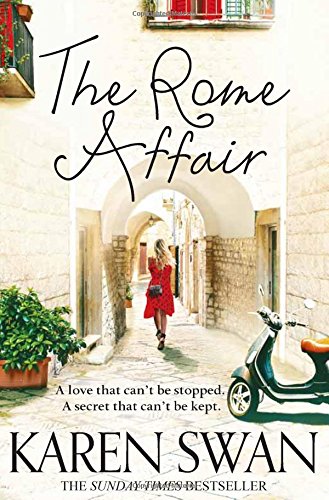 1974: Elena Damiani lives a gilded life. She’s been married three times by the  age of 26. Some would say it’s an escape from the restrictions she is faced with in life, but no one can break her spirit. Apart from one man, the man she truly falls in love with but who she can never have.

2017 Francesca Hackett is working as a  tour guide in Rome, trying to erase the ghosts she left behind in London. She finds a stolen handbag and returns it to its owner – only to find that it’s the grand neighbour who lives across the piazza – famed socialite Viscontessa Elena dei Damiani Pignatelli della Mirandola.

The handbag contains a letter Elena has kept unopened for twelve years written by her husband on his deathbed. She asks Cesca to help her research her memoirs but it’s the unexpected stories which spill out from that research which are the most fascinating and intriguing. A secret lies buried,but not for much longer….

Most of the streets and indeed Palazzo’s in the novel are fictional for reasons which become clear. However they all evoke the setting  of a  Rome filled with cobbled streets, old squares, sun drenched palazzos and twisting alleyways which lead to goodness knows where…

The square where Cesca lives. “Piazza Angelica was dimpled wit light, rows upon rows of scooters lined up in military formations, the young Romans all clustering around the fountain in the centre as though it was a centre of gravity, puling on them hard.

The little building which Karen used as the basis for Cesca’s apartment  in located in Via della Luce and you can see which one:

Oh the opulence and wealth contained within these walls! The marbled corridors, the grand staircases and the wall, covered with the paintings of the great italian masters. It’s a long walk from the grand, heavy door at the entrance to the room where Cesca first meets the Princessa and you can hear the clack clack of feet during that time.

The underground caverns of the city – Catacombs of San Callisto . This was a vast city of the dead where half a million early Christians were laid to rest

The little cinema around the corner of the Trevi Fountain is also the entrance to ancient ruins still standing beneath the streets.

The Capuchin Crypt beneath Via Veneto  – Catacombs of Rome

Perhaps the most spectacular subterranean site of them all -a series of underground chapels, decorated with the bones of some 3,700 Capuchin monks.

Elena’s early life is described as opulent and with everything money can buy. That does not of course involved her having freedom to do what she pleases. She is expected to behave and act a certain way, attend the poshest parties and be seen at all the right places. But she can’t do what she wants as a gilded cage is still a cage.

This is the family who has to discuss Palm Beach, who themes their parties ‘Carnivale’ She is often asked why she looks glum or appears to be crying as she has everything money can buy.

Elena’s journey also takes her to Boston,New York, Malibu and in Italy, Venice and Ischia but these are merely stop-overs in the journey of her life.

B) "Cesca's apartment"
F) An Impressive building with underground caverns..

Karen Swan writes some amazing stories and this has to be my favourite one yet. Transported to Rome? Right at the heart of the city and its underground caverns no less. The story had as many layers as the city itself – a missing ring, a hidden letter, secrets from the past and an old woman who hides away and who picks a young girl to write her memoirs.

Karen does locations and evocative ones at that like no one else. The setting is exquisite – the cobbled streets of the city, a huge plaza and then a mysteriously rich and ornate mansion where much of the story is set. If you wonder what goes on behind the gilded facade of those Rome homes, then this might well contain the answer. The sense of the city is also what shines – the cobbled streets, the passing scooters and the shouting in in the street. I could picture everything very clearly from the stone steps up the girl’s flat and the ornate stair case in the large house. Oh and I was as nervous as Cesca when she got to meet the great lady herself.

The story of the hidden past was exceptionally well done. I lingered over this book and it made me feel so good, dreaming of Italy and the hidden secrets we all could have. A famous woman perhaps has more than most and the story unravels to a fascinating denouement. I was enthralled throughout – the writing is just lovely and more than transports and evokes the language as well as the location.

It always helps to have a few nice Italians in the mix and again Karen delivers. The Italian passion for life, their mixed pasts and their torid emotions are characters in themselves here. What a joy of a read and I was just sorry to leave that little enclave of Rome I’d felt at home in when reading.

It played out so exquisitely in my head that I only hope this is a movie one day. Bellisima!