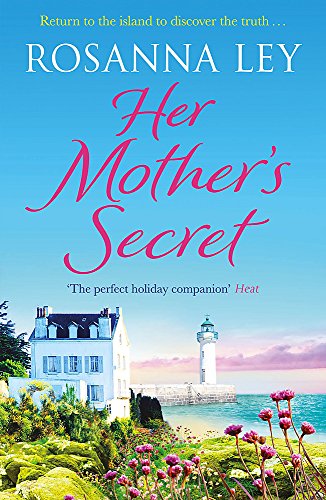 2000s: She must return to the island to discover the truth

Colette has avoided returning to her homeland for along time – the magical island of Belle-Île-en-Mer in Southern Brittany – afraid to confront the painful memories she left behind. But she is forced to return when a neighbour tells her about her mother Thea’s failing health. This will be the first time Colette has returned since that day.

One on the island, Colette starts to take to island life, taking on the running of her mother’s flower shop and making friends with Élodie from the Old Lighthouse where Thea once worked as a nanny . Soon, Colette finds herself softening and being drawn back into the landscape of her past.

When she meets the enigmatic Étienne, she stars to wonder what other suprises this island will bring.

Oh the sunny beaches of Cornwall and the town of Porthleven are the draws at the start of the novel. Colette has to leave here for a while to return to the island of her birth and to see her mother after many years of being away.

It must be hard going back not only to your childhood home you haven’t been for sometime but also to see your dying mother and to face your past at the same time.

It does have happy memories however in some ways:

“She would go to all the places she she loved that she visited with her father – the old church at Locmaria and the pretty bay beyond the Pointe des Poulains where the actress Sarah Bernhardt had famously made her home. the little village of Bangor and rocks at Port Coton.” ( famously painted by Monet where he came for five days apparently and stayed for 75, painting some 39 canvases)

There’s a lot on this island to explore for literary travellers but at first it’s bitter sweet for Colette. She sees the landscape through familiar eyes but also as those of a stranger. You can see the footprints of the past on every stone, rugged cliff and sandy street…

This is where she used to live when she was an au pair and where Mathilde lives now:

The Phare de Poulins is where you should go to visit as this is in the spot, overlooking the landscape she is so familiar with but yet still a stranger. It’s also the land where Elodie still lives, creating art from driftwood.

“Elodie had searched the rocks and beaches of several of their little coves – coves as good as private since you had to pass trough the grounds of the old Lighthouse to get to them.

She was lucky , she knew, to live here, to work here; fortunate that Belle-Ile could be stormy, wild and unforgiving.”

This is the place linked to Colette’s past and soha special significance to her.

I want to go to the island of Belle Ile en Mer now! If it’s half as gorgeous as described in this book, then I’m there.

The story will more than transport you there – the sights, sounds, aromas and glistening waters not to mention the links to Monet and Sarah Bernhardt! The story too is very well done – a secret, well secrets which have been kept for years, threading through more lives than were supposed to, and causing ripples that both leave and return to the island.

Colette is back to look after her mother. There’s painful memories to the past and as she explores this familiar yet strange landscape, she finds out devastating truths. She and her past are tied to this land of contrasts in ways she least expected.  Rosanna writes with ease and local colour – the research is clear and neatly woven into each word creating a rich water-coloured landscape on which the story across the years, amongst the families, unfolds.

I was so sad to leave the island and Colette! Wonderfully textured and you can feel the sea air on your face as you read!