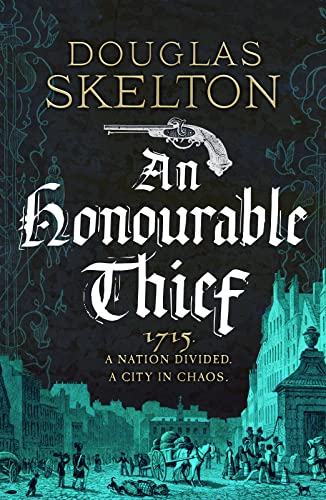 Jonas Flynt, ex-soldier and reluctant member of the Company of Rogues, a shady intelligence group run by ruthless spymaster Nathaniel Charters, is ordered to recover a missing document. Its contents could prove devastating in the wrong hands.

On her deathbed, the late Queen Anne may have promised the nation to her half-brother James, the Old Pretender, rather than the new king, George I. But the will has been lost. It may decide the fate of the nation.

The crown must recover it at all costs.

The trail takes Jonas from the dark and dangerous streets of London to an Edinburgh in chaos. He soon realises there are others on the hunt, and becomes embroiled in a long overdue family reunion, a jail break and a brutal street riot.

When secrets finally come to light, about the crown and about his own past, Jonas will learn that some truths, once discovered, can never be untold…

London and Edinburgh via An Honourable Thief

The area in the novel is centered around Drury Lane, St Giles and the area known as The Mint where crooks and criminals go free. There is also an area in  St Giles called Satan’s Gullet that requires special mention. Bess has to cross this area to get to her lodgings.

“They called it Satan’s Gullet and with good reasonl for those unsavoury enough to ttep into it alone oftren did not stepo put agan with their purse, virtue or person intact. St Giles Entire was no leafy glad, but the Gullet was a hellhole.”

“A multitude of bobbing heads crammed into the open area beneath the castle like sand in an honrglass. The Grassmarket, bound by tall lands and byikdings ov arying antiquity, was a wide and airy piazza, fir it was htere that markets and horse sales were held, this day it had a cramped feeling, such was the press of humanity.”