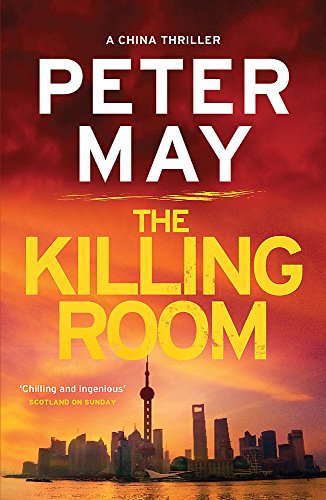 2000s: The third in the China thrillers

When a mass grave containing eighteen mutilated female corpses is discovered in Shanghai, detective Li Yan is sent from Beijing to establish if the bodies are linked to an unsolved murder in the capital. Here, Li will be working with Mei Ling, deputy head of Shanghai’s serious crime squad.

Mei Ling is a formidable woman: a fact that is not lost on Li’s on-off lover, forensic pathologist Margaret Campbell. But when Campbell, vulnerable and still grieving the loss of her father, learns that the victims were subjected to ‘live’ autopsies, she knows the case is bigger than her pride.

Li, Campbell and Mei Ling are now entering the arena of a sickening nemesis, and opening a door behind which lies each of their very worst nightmares.

Travel with author Peter May to China in #Authorsonlocation

In this installment of the China thrillers, Margaret and Li Yan are sent to Shanghai. The two cities are noted as being rivals and there’s lots of comparisons between the two, not just in the differences between the police investigations:

“The expressway from the airport became Yan’an Viaduct Road, a six-lane highway raised on concrete pillars that ran through the heart of Shanghai, bisecting it from west to east….”

“It was nearly fifteen years since he had last been  in Shanghai, and it had changed  beyond recognition. There were still the single-storey blocks of traditional Chinese shops and apartments crammed into crowded narrow lanes, still the bizarre pockets of European colonial architecture  left by the British and the French from the days of the International Settlement.”

Li is impressed by this tall imposing tower.

“the bleak dark  concrete landscape of Lujazui had been transformed into a multi-coloured light show. The Pearl TV tower and a  vast glove as its base were floodlit green”

Mei and Li eat here, and it’s where the bridge of the nine turnings is – the bridge has numerous  twists to ward off bad spirits who can only travel in straight lines apparently!

The crime scene can be seen from here, but to be fair, it’s one of if not THE tallest building in Shanghai so you can pretty much see everything from here

It’s also known as the Jinmao Building or Jinmao Tower, and is an 88-story landmark skyscraper,  420.5 metres tall and is one of the tallest buildings in the world.