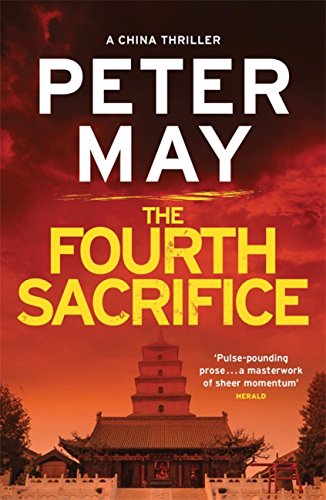 200s: The second opinion, the third degree, the fourth sacrifice

The Chinese police have once more been forced to enlist the services of American forensic pathologist Margaret Campbell: this time to investigate a series of four horrific ritual executions that have taken place in Beijing.

Detective Li Yan is determined to discover just how one of the victims in particular, an American diplomat, became caught up in the slaying. And he is arguably even more determined to have nothing to do with Campbell.

The polarity that once attracted Yan and Campbell eventually pulls them back into partnership. Yet the closer they are drawn to the truth, the nearer they come to a killer prepared to use extreme force to conceal it.

These Peter May China Thrillers really do get under the skin of the city, country and the people of China

The second case is a tricky one as three people have been found decapitated in what seems to be a Chinese ritual of some sorts. The fourth one is American however and so Margaret and the American authorities are brought into play.

Margaret is still navigation the city and culture. The sense of ‘losing face’ and the Chinese preference for taking time  on an investigation and not speaking up to, or against superiors, not to mention the strong sense of returning a favour to someone –  –  which slows or at least changes the way an investigation is carried out.

A city of contrasts and puzzles. The maze and confusion of the city is well evoked – from the small and government provided flat in a compound where Li the Detective lives to the small street buzzing with traders and cooking smells where Mei Yuan makes her pancakes, the city has a mix of smells and tastes which overlap on every page, making this a sensory overload. Margaret, the American character always notices these things and they form the basis of her experience of the city. For more food, head to the Dong’anmen Street where the famous night market is. The characters do and get some surprises.

Ritan Park and Tianamen Square are two sites which are heavily references in the novel and of course they are the central pivots of the city at large. Margaret stays in a hotel here and so gets to know the park well. Tianamen Square is an iconic site and also pivotal in the novel where a school is where the police have to investigate.

This is an interesting part of the city and when the investigation takes them there, they get to see the oldest Mosque in the city.

At archaeological sites in Xi’an’s surrounding plains are the famed Bingmayong (Terra Cotta Army), thousands of life-size, hand-molded figures buried with China’s first emperor, Qin Shi Huang. This is where Daniel Zimmerman is involved with television work and which later amazes Margaret.