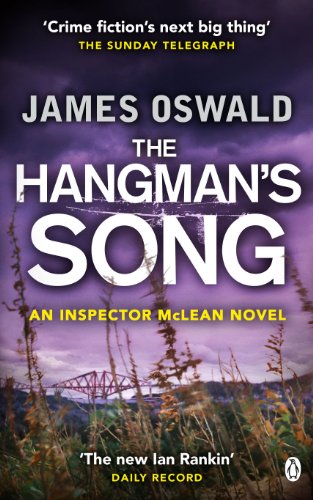 2000s: Another grim case for the Edinburgh based DI

In this the third in the DI McLean series from James Oswald, the DI has been seconded to the Sexual Crimes Unit (SCU) and so finds himself working on some harrowing cases such as the death of a pimp and two suspicious suicides.

When a young man is found hanging by a rope in his Edinburgh home, Detective Inspector Tony McLean at first thinks this looks like a suicide but there’s something sinister about the suicide note. And then another body is found.

And then there is another. Something terrifying stalks the streets of the city.

The Hangman’s Song picks up pretty much where the Book of Souls left off and it grabs you with the scruff of your neck. But this trip to Edinburgh is murkier and more gritty that the others. It’s raw and graphic in places so not for the faint hearted. And DI McLean is understandably a bitter man.

The supernatural aspect to the book is what makes it perfect that it is set in Edinburgh so you should definitely go on a ghost hunt or just to walk the same streets that McLean does at night to feel the fear. A lot of the characters are going through changes and so is the police department so everything is up in the air which provides for even more chaos in McLean’s life.