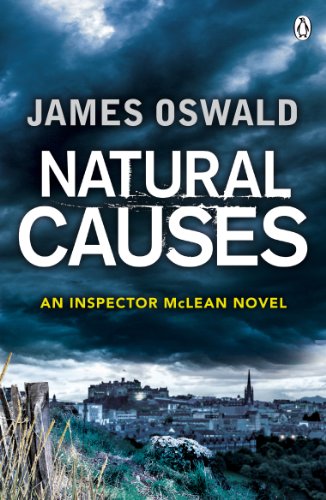 2000s: Inspector McLean is not your average policeman. And Edinburgh does not provide your average crime scene..

Inspector Mclean is not your average policeman. Orphaned at the age of 4, he was raised by his very wealthy grandmother.

But the thing that really sets him apart is the fact that he is sensitive to the paranormal. Whilst investigating the story behind the mutilated body of a girl murdered 60 years ago,  a body has been discovered walled up in the basement of an old Edinburgh house. She has been brutally murdered, her internal organs removed and placed around her in six preserving jars.

The murder is found to have happened some sixty years ago, as an attempt to re-enact an ancient ceremony of trapping a demon in the dead girl’s body and thus conferring immortality on the six men who each took one of her organs…

There is obviously a lot more to be discovered about Tony McLean’s past and the reason why he is sensitive to the evil that lurks in Edinburgh. Why was his family so wealthy? Who was the man in his grandmother’s photo, perhaps even his parents’ deaths will have to be investigated once more.

Edinburgh with its gothic overtones, dark stone buildings and narrow streets is an ideal setting for a crime story with a supernatural element. DI Mclean knows this city well,this is his city and his flat was even modelled on one in Newington where the author lived as a student. Perhaps not exactly however:

“The front door of the tenement was unlocked again, wedged half open with a bit of broken pacing slab. Mclean tough about shutting it properly, but decided against it. The last thing he wanted was to be woken by the students from the first floor flat pressing all the buzzers at four in the morning until someone let them in.”

Down the street to the local, as in any good police drama there has to be a local and the local beer just has to be tasted in order to get inside the character’s  mindset:

“The Newington Arms wasn’t the best place to drink in Edinburgh not by anyone’s measure. but it made up for that by being the nearest to his home. McLean pushed through the swing doors…….”

Tony McLean’s station does not exist in real life but is instead a strange merger of St Leonards and Gayfield Square Police Stations, so geographically it’s somewhere in the vicinity of The Pleasance. Inspector McLean works here and it’s a familiar spot when he’s considering a case and working with his rather ‘varied lot of colleagues’.

The old town is also the scene for a murder and the rather touristy streets of the Royal Mile and its surrounds takes on a dark tone:

“As it was, their destination was only a few minutes from his flat. Patrol cars flashed blue lights on the cobbles of the royal mile just across from St Giles Cathedral as uniforms fended off curious friday night revellers, keen to get an eyeful of whatever was happening.”

Across Princess St and the scene of several incidents including one in a nice picturesque park and square  – St Andrew’s Square at the centre of the city. Bet McLean doesn’t have time to sit in the rather nice coffee bar there. There’s a murder though..

And then to the home of the lawyers and solicitors in the West End where the view of the city takes on a whole new atmosphere:

“Mclean remembered a time, not so long ago, when all the Edinburgh family firms, the lawyers and stockbrokers,merchant bankers and importers of fine wares had their office the grand old houses of the west end, now the streets were full of basement restaurants, boutique shops, health clubs and expensive apartments. times changed, but the city always adapted.”

And at the centre of its new town, on Princess Street sits Waverley Station with the whole of Edinburgh in one small spot, magnified:

“Waverley station was busy at the best of times. with the festival and the fringe in full flow it was a nightmare of milling backpacks, horn-tooting taxis and lost tourists. throw in an ambulance , a couple of squad cars and a halt on all train movements and the chaos was complete”

Some of the story takes place during the time of the festival in August and so the buzz, chaos and challenges that the festival brings are all brought to light creating even more anguish and strange problems for DI McLean.