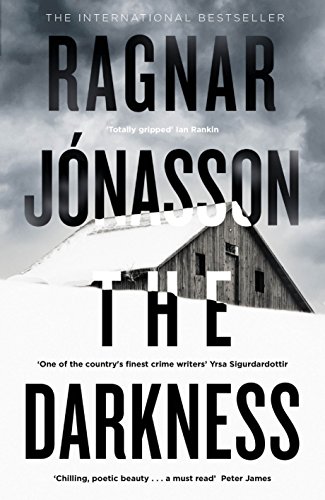 2000s: DI Hulda Hermannsdóttir of the Reykjavik Police has one more case to solve..

Before Detective Inspector Hulda Hermannsdóttir of the Reykjavik Police is forced into early retirement she is told to investigate a cold case of her choice, and she knows just the one.

A young woman found dead on remote seaweed-covered rocks. A woman who was looking for asylum and found only a watery grave. Her death ruled a suicide after a cursory investigation.

But Hulda soon realizes that there was something far darker to this case. This was not the only young woman to disappear around that time. And no one is telling the whole story.

When her own force tries to put the brakes on the investigation Hulda has just days to discover the truth. Even if it means risking her own life . . .

The city of Reykjavík is darkness personified in Ragnar’s world. In Hulda’s,  it’s her workspace where she is due for retirement. The case starts here with the police station, the Hotel Borg where the woman works and the nearby golf course. Even the famous hot dog stand on Tryggvagata gets a mention and is well worth a visit if you go on this booktrail.

Most of the case takes place south of the capital in the Reykjanes Peninsula region:

Hulda drives south following what used to be her daily commute when she lives in her house by the sea in Alftanes. She’s made the decision never to go back for the memories there but she drives on and arrives in Njardvik which lies close to Keflavik Ariport on the Reykjanes Peninsula

South of the capital, this is where the body is found and where the asylum centre is located. Some of the most stunning countryside in the whole of Iceland. You could even go hiking on the nearby Mount Esja as Hulda does. Or for the less adventurous, there’s always buying a packet of the rather nice Prins Polo sweets and enjoying a little bit of Polish/Icelandic history instead.

Kefalik was founded in the 16th century, mainly because of its  fishing industry. During World War II the military airfield served as a refueling and transit depot. The airport is now Iceland’s main international hub. Another of its more unusual names appears to be bítlabærinn or “The Beatle Town” since it has spawned many musicians over the years.

Read this over the Christmas holidays in the spirit of the icelandic Jolabokaflod and it’s a new direction for Ragnar. Quite different to his other ones I’ve read so far – well this is a new series – but the writing felt even darker and inward looking than before. There’s a sense of extreme darkness throughout and that’s not even involving the title.

It’s the first book in a trilogy but is in fact the ending of that story – well this is going to mess with my head and no mistake. There are a lot of loose ends, suggestions and things happening off the page which is again different to his other books but I still want to read the rest. I felt unsettled that the mystery level evident in his  Dark Iceland wasn’t quite to the same level here and the sense of foreboding is less. More of a straight forward police procedural.

However, there’s lots to like here. The threads are loose in this book but tighten towards the end and I think that is going to be really interesting. The plot moves forward nicely and the choice of setting here – the remote peninsula and the chilly, remoteness is ever present.

A different Ragnar but this is only the first in the series so I was left feeling as if there were many things up in the air – the cold, chilling Icelandic air though – so I will be back for more.