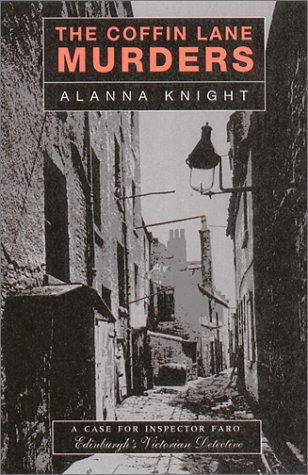 The frantic arrival of PC Dean at Inspector Faro’s door one winter morning brings news of the first killing in Coffin Lane. Accompanied by his step-son Vince and Vince’s partner at the surgery, Dr Conan Pursley, Faro rushes to a horrific scene. For a trail of blood through the snow leads to the body of a young woman, a knife wound in her chest. Molly Blaith had been on her way to post a letter for her employer Miss Errington. Or had she? For such a journey should not have taken her down Coffin Lane.

Was she up to something else? Is something worse yet to come? Two days later Faro gets another knock at the door…. PC Dean has come to report the second murder in Coffin Lane.

The great city of Edinburgh lay to his high, Behind a veil of mist the rose-tinted walls of the castle were the home of a fairy-tale princess, awaiting a knight on a white charger, while far below its steep battlements history’s blood-soaked High Street and dark, foul-smelling closes arose from a shroud of innocent purity temporarily absolved from all evil.

“Once site of the town gibbet, in kindlier times and weater, it ws a afavourite haunt for loves and a quick passage to the golf course” There seems to be another Coffin Lane in the Dalry area and close the that cemetery.

On the edge of Queen’s Park in Edinburgh, and on the far side ran the “Innocent Railway’ (Proudly so-called since no lives had been lost in its history) Originally is was a single tracks horse-drawn freight line between St Leonards and Musselburgh and a convenient method of transport from the Fisherrow fishwives passengers. With the advent of steam locomotion, it became a popular mode of transport for passengers wanting a nice journey, free from the street of horse and carts.