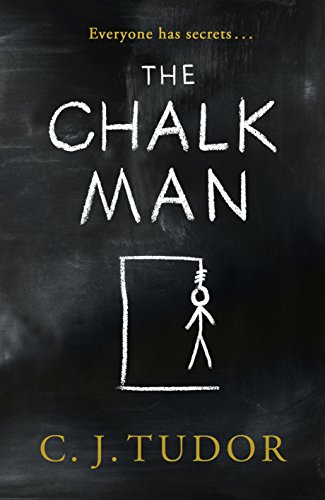 Looking back, it all started on the day of the fair and the terrible accident. When twelve-year-old Eddie first met the Chalk Man.

It was the Chalk Man who gave Eddie the idea for the drawings: a way to leave secret messages between his group of friends.

And it was fun, to start with, until the figures led them to the body of a young girl.

That was thirty years ago and Ed thought the past was behind him. Then he receives a letter containing just two things: a piece of chalk, and a drawing of a stick figure. As history begins to repeat itself, Ed realises the game was never over . . .

This is not a novel of locations but of a trip down memory lane – well to some degree. With the dashes to the sweet shops, the Woolworths pick and mix and the pink and sparkly jelly shoes that girls were very fond of wearing back then.

The Chalk man is not something you would want to see or meet mind you. In your childhood, the game is about making your friends scared, spooking them, making fun of them and growing up together any best way you can. Fancying girls, going to the funfair with the rollercoaster, the Waltzer…all this will transport you back in time.

On a totally unrelated thread there are some chalk figures in the country which are far more pleasant than the chalk man and you should visit these to calm your nerves.