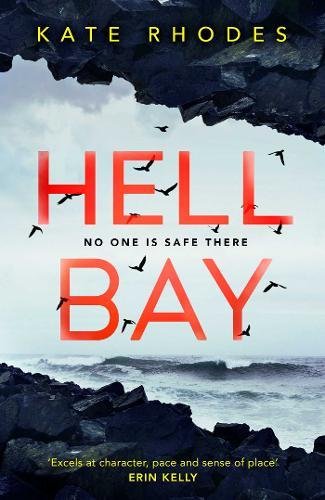 2000s: No boats in, no boats out, the murderer is still on the island

DI Ben Kitto needs a second chance. After ten years working for the murder squad in London, a traumatic event has left him grief-stricken. He’s tried to resign from his job, but his boss has persuaded him to take three months to reconsider.

Ben plans to work in his uncle Ray’s boatyard, on the tiny Scilly island of Bryher where he was born, hoping to mend his shattered nerves. His plans go awry when the body of sixteen year old Laura Trescothick is found on the beach at Hell Bay. Her attacker must still be on the island because no ferries have sailed during a two-day storm.

Everyone on the island is under suspicion. Dark secrets are about to resurface. And the murderer could strike again at any time.

Authors on location  – Kate Rhodes takes you to Hell Bay

If ever there was a book to evoke a setting and have it play a major role in a book, then this is it. Dare you stay however in Hell Bay? It’s a real place and a real hotel

Bryher is quite a place. It’s the smallest inhabited Scilly island and only around a mile and a half long and half a mile wild at its widest point. In the book, it becomes almost a prison when because of the weather, no boats are allowed in or out. There’s been a murder in the mean time however so the island has a murderer in its midst….

This is an island were people who returned are viewed with suspicion, ghosts arrive despite the boats being stranded. There is only one phone box on the island and “the place reeks of the past” The island has its stalwarts as well as its secrets. Plus some very interesting characters.

“Most of the island’s buildings are clustered in the valley, sheltered from the wind by the surrounding hills”

The house where Ben grew up is in Hell’s Bay, where the only other building in sight is the island’s hotel , “Its white outline resembling a row of sugar cubes scattered along the horizon” The only sweet thing on the island as the sourness rears its ugly head

This is an aptly named place Hell’s Bay for ” if people speculate about each other’s problems in a place this small, it would tear itself a part”

“There’s no such thknkg as a solitary walk in a place this wmall. Time lapse photography would show islanders constantly meeting s they go about their business” The beaches are a meeting point, the rocks a challenge and the cliffs a real danger but also a viewpoint to see the boats arrive and bringing supplies. This island traps those it has on board, and releases them rather reluctantly.

There is so much to like in this novel – Death on a remote island setting, an enclosed community with enough secrets to drown a ship, which is ironic as no boats have managed to land or leave the island for two days because of the weather. And in that time there’ s been a murder

Hell’s Bay is a real place so imagine the tingley feeling I got when booktrailing this one! All the places are real, and the island was omnipresent on each and every page. Stunning descriptions and a world created not unlike that shifty, suspicious community feel that worked so well in Broadchurch.

It felt very Broadchurch as it’s an outsider policeman who comes to the island and falls into the case.  He’s got history here and I felt myself falling a little bit in love with him and his ways. What a guy! He develops nicely though the novel and I need to see him again.
The mystery of who may have taken and murdered a sixteen year old inlander is a tough case to crack and everyone in under suspicion. There’s a lot of delightful character analysis here -every one clear in your head via their tone and foibles. For me, the island was by far, the star of the show and provided a backstory, backdrop, way of life, weather challenges and isolation that chilled and thrilled in equal measure. It’s a dark foreboding place…

Oh and how I smiled when the policeman’s dog is called Shadow! Rubbed my hands with glee I did.

A great novel for mystery, sense of place and a spotlight on a shaded and shadowy island community with the best title I’ve read in a long while!