Death at the Seaside (Kate Shackleton #8) 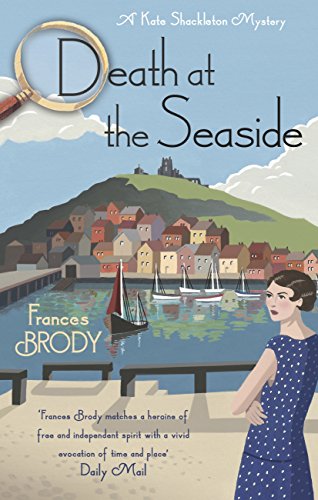 1920s: Kate goes on holiday to Whitby for a quiet break – but this is the place where Dracula once roamed…

Kate is off to Whitby for a much needed rest. She visits her school friend Alma who works as a fortune teller there.

However she soon finds out that Alma’s daughter Felicity has disappeared, leaving her mother a note and the pawn ticket for their only asset: a watch-guard.The jeweller who advanced Felicity the money is Alma’s ‘gentleman friend’

Obviously the first stop of Kate’s investigation is to the jewellers shop –  where she makes a shocking discovery. But investigation further is not going to be easy since a wall of silence goes up around the town and the town’s officials who are keen to keep Whitby tourist friendly are not about to let Kate cast a shadow on anything.

The whereabouts of a woman in Whitby is Kate’s latest puzzle to solve.

“It’s a town which draws people to it, this end-of-the-world town hemmed in by the sea at its front and the wild moors behind”

The town has a great reputation as a setting for a crime, gothic thriller and murder not to mention a whole host of descriptive reads.

Whitby is of course the birth place of Bram Stoker’s “Dracula” which is the kind of atmosphere recreated in this novel  – the historical background plays its part and more. The town is one steeped in atmosphere mist and shadows:

“Black’s Guide to Yorkshire will tell you that Whitby is a town of much antiquity but little historical importance and that it owes its origin to the abbey founded in the seventh century by Oswy, King of Northumbria.”

Kate has a personal link to the place:

“For me Whitby is a place of happy memories. The careless of being young, of having a future so vague and amorphous that it seemed like a dream or a tale from some log- ago story”

In Whitby, one an be alone and yet feel connected to the whole world” Fishing boats have re[laced whaling ships but the beaches are still lined with children playing and the smells and sounds of the seaside.. Staying at the Royal Hotel, you can maybe not see as many parasols as in Kate Shackleton’s time but it’s still the haven it was for her. “Quiet refinement” she calls it.

The unique sites of Whitby:

“Gulls squawked their derison as I debated which way to go , not remembering my way down higgledy-piggledy streets.” Kate pops into a newsagents to buy postcards, butter toffee and a local paper. She s

The gothic ruins of the abbey watch over the town of Whitby – the 39 steps symbolic in legend and literature – and in the book there’s a guide who takes visitors round the sites and tells them tales of whaling, smuggling , storms and tempests, ghostly doings and the arrival of Count Dracula on a stormy night, including the parts that Mr Bram Stoker left out”

Where Alma is currently living and where she points out to Kate the intricacies of the old house and the history behind it. One of the oldest houses in Whitby she says and a lot of detail such as the two old heads on the wall were said to all that is left of Stockton Castle. The fireplace is said to be a Dutch pulprit and delft tiles. Some people however say that it’s haunted.

I do love Frances Brody novels. Sleuthing mysteries before the days of mobile phones and technology so good old fashioned brain power is what’s needed. With the novel being in first person, you’re inside the head of the character and I liked her from the off – I would even want to borrow those lovely hats she often wears on the covers.

I like the fact that she’s on  holiday and yet despite her wanting a rest, a murder mystery lands at her feet. Very Miss Marple and Columbo wrapped into one. The use of language is perfect and adds to the overall feel of the mystery -higgledy-piggledy streets are mentioned and the whole landscape is whimsical and reminiscent of postcards past. There are lots of funny goings on – shenanigans even, in this mystery. People are up to good. And it was a  pleasure to visit Whitby and to meet them.