A Death in the Dales (Kate Shackleton 7) 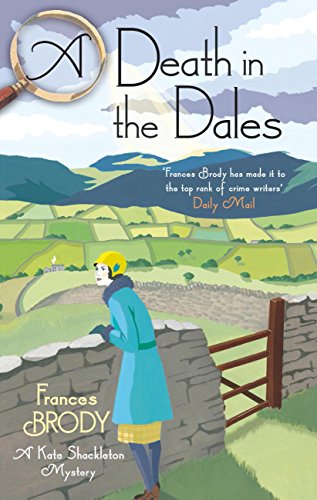 1920s:A murder most foul, A village of secrets, The case of a lifetime

When the landlord of a Yorkshire tavern is killed in plain sight, Freda Simonson, the only witness to the crime, becomes plagued with guilt, believing the wrong man has been convicted. Following her death, it seems that the truth will never be uncovered in the peaceful village of Langcliffe . . .

But it just so happens that Freda’s nephew is courting the renowned amateur sleuth Kate Shackleton, who decides to holiday in Langcliffe with her  teenage niece, Harriet. When Harriet strikes up a friendship with a local girl whose young brother is missing, the search leads Kate to uncover another suspicious death, not to mention an illicit affair.

As the present mysteries merge with the past’s mistakes, Kate is thrust into the secrets that Freda left behind and realises that this courageous woman has entrusted her with solving a murder from beyond the grave. It soon becomes clear to her that nothing in Langcliffe is quite as it appears, and with a murderer on the loose and an ever-growing roster of suspects, this isn’t the holiday Kate was expecting .

Kate Shackleton quite sensibly jumps at the chance of a holiday in the Yorkshire Dales. Why wouldn’t she? It’s a beatufiul place and her friend Lucian Simonson has offered her the chance of a place to stay. Kate needs time out from her investigations and her niece Harriet who is suffering from diphtheria

But in true Kate style,  the house has a former owner with a few problems of his own. Lucian’s aunt witnessed a murder apparently. Mystery and intrigue seem to follow Kate around and the Yorkshire Dales might look all innocent and peaceful but it’s not!

For a real ride back to the 1920 – the nearby Settle to Carlisle railway is a must!

A charming little village in Yorkshire brought to life in this novel. Typical of any small village in 1920s Yorkshire. Kate and Harriet arrive in May when it’s a vision of loveliness and spring is all around. The landscape is going to be restorative for them both.

But there was apparently a murder in this lovely quaint place all those years ago. It can be a harsh place however for farming is not the leisurely activity and the weather conditions can affect everything that goes on here. Old murders can come to light amongst the rocky crevices, the rolling hills and the isolating villages. Of course when Kate starts to investigate, this ‘outsider’ is not welcome in this close knit community and is viewed with suspicion. Especially since this is  a time when the world is coming to terms with the aftermath of the war. Many men here did not come home and the landscape of life socially as well as geographically is challenging.

“On the approach to Settle, I noticed the whiteness of the roads,due to the limestone formation. Sharpley defined hills, boulders and rocks stood out against green foliage. Castlebergh came into view towering over the town. We would not be able to climb the great rock but Lucian had told me there were sometimes funfairs there”

Booktrail Boarding Pass Information: A Death in the Dales