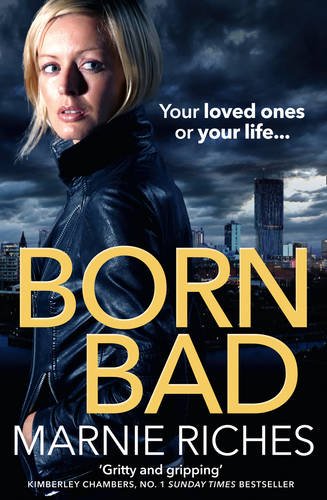 2000s: Gangland Manchester in all its gritty glory

Manchester’s criminal underworld is shaken to the core when gang leader Paddy O’Brien is found bleeding by the poolside of his sprawling Bramshott mansion. So begins a fierce battle for the South Side, with the leading Manchester gangsters taking the law into their own hands – even when they have to play dirty to win…

This is not going to be on the Manchester tourist board anytime soon – but what a trail around Manchester it takes you and what a view of the underbelly it leaves you with! It’s fat, flabby filled with gore and grit underbelly.

The Mancunian rain is “determined”, one of the characters, Conky is reading ‘A Brief History of Seven Killings’ – well at least he’s reading I suppose. The buildings and skyline of the place is filled with “hlking grey boxes behind high Iron fencing that rusted in the Mancunian drizzle”

Not surprisingly the Strangeways prison features but with the Marnie sense of humour ” “He could see the sun hitting the dreaming spires of Strangeways prison. The read brick was on fire today” It gives a warmth to the city which because of all that aforementioned rain never really dries out.

This is a Manchester of gangs, gang warfare drugs and goodness knows what else. Illegal immigrants and more. The murder of gang leader Paddy O’Brien,  found bleeding by the poolside of his sprawling Bramshott mansion starts a fiercer than fierce battle for the South Side.

Not only is it the UK’s second city, but Manchester is the beating heart of the British Isles. The Romans settled there. The Victorian industrialists thrived there. The Smiths conquered the world from its famed gritty backstreets. Yes, despite the legendary rain and overcast skies, Manchester is a hearty historical and cultural stew that will stick to your ribs, served up in a melting pot of glorious architecture, – old and new – beautiful surrounding countryside and near-mythical friendliness of the locals…all with a side-order of world class music.

If pre-Raphaelite art or L.S. Lowry are your bag, it’s got it. If cuisine from every continent is to your taste, it’s got it. Clubs, pubs and theatres? It’s awash with them. Then, there’s the small question of football and cricket… It’s got more than its fair share of that, too! In fact, Manchester offers pretty much everything London has, except you can walk the length of the city centre in half an hour and might actually be smiled at and greeted by a stranger en route! 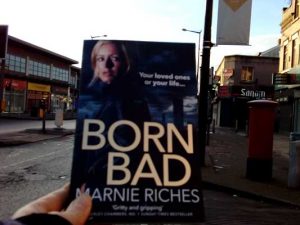 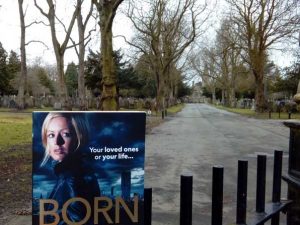 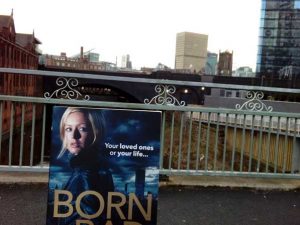 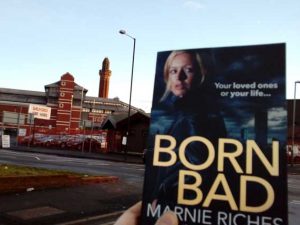 This is the equivalent of being grabbed by the throat in the pouring rain and trying to struggle out of a headlock whilst your feet flay about and your arms wave for help that will never come….If you want a dark view of Manchester, but a gritty, tripping one all the same this is the book for you. Of course it’s not exactly something the Tourist Board are going to get excited about but the overall feel of this book is gritty realism of the gangster world. Some books of this nature are overly graphic or even a little bit ‘play acting’,a bit Eastenders if you will, but this felt raw and real and down right dirty at the same time.

Despite this being a whole new world to what I’m used to, it was a nail knuckle of a ride and I could feel that damp rain on my back the entire time. The entire atmosphere was one of morbid despair  – Marnie’s writing shines through however and the tongue in cheek humour bring humanity and emotion to the bleak landscape.