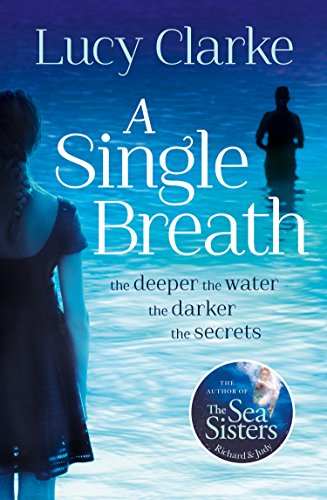 Eva has only been married to Jackson for 8 months when he tragically drowns.

Having always been a bit of a closed book, Jackson has never really spoken of his past or of his family. so when Eva decides to visit his homeland of Tasmania she is expecting to find things out about his that she didn’t know.

However, what she finds out shakes her to the core.

Just who was she married to? How well can you really know the person closest to you?

Setting is an integral part of any book and with A Single Breath, it is as much a character as the others in the story. It is the sea in Dorset which sweeps Jackson away and which starts Eva’s journey across the world to Tasmania. Then the (fictional) setting of Wattleboon (in reality Bruny Island) came into its own with the remote locations, the rough sea, Saul’s shack and of course Jackson’s past.

The descriptions of the island, as Eva mental torment grows, are so stunning that they show the extent of her aguish even more –

She located Shoal Bay in the south-east corner of the island.

The crossing only takes twenty-five minutes, but by the time the ferry docks, Eva feels as if she’s arriving at the edge of the earth.

This is a novel all about secrets and the power that both keeping them and discovering then dealing with them can have over us.

The descriptions are STUNNING. As a reader, we get to go fishing and diving in Tasmania, meeting sea dragons, trying free diving and finding out about the importance of the shack –

“Owning a shack is a Tassie thing. They’re bolt holes, a  place to disappear to when you’re craving some space, some wilderness”

“.. a sea dragon drifts before then. Its body is a reddish colour and looks as if it’s been lit from the inside, electric pinpricks of blue and yellow spotting and striping its surface.”

Then, a moment of calm in a sea of swimming lies, wrapping themselves around her and dragging her further down into an abyss…

Eva stands on the deck of the shack, breathing in the small so familiar to her now: salt air, eucalyptus, a briny tinge of seaweed.

That last line of the blurb really made me want to read this book. What on earth does it mean? Truth and lies mixed up like that? Well, I was intrigued and having loved Lucy’s previous book, The Sea Sisters, started reading immediately – all in one go – causing me to stay up and late and suffer from the mother of all book hangovers the day after….

Reading this book in one stretch was not difficult – there were more twists and turns than any thriller – in fact this was one heck of a thriller as there was no way of knowing what would happen next and just when I thought I knew, Lucy once again pulled out the rug from underneath me.