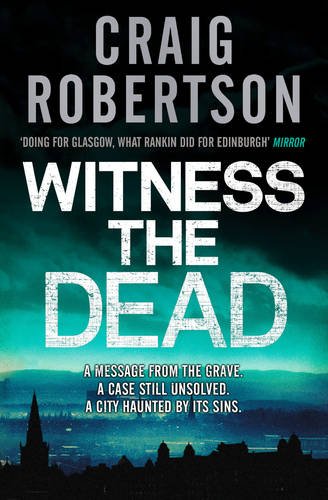 A serial killer by the name of Red Silk haunts the city’s nightclubs. The police suspect and Archibald Atto, later imprisoned for other murders, and think they have got their man.

DS Rachel Narey is called to a gruesome crime scene at the city’s Necropolis. Former detective Danny Neilson spots similarities between the new murder and those he investigated in 1972 – but Atto is still behind bars so who is terrorizing Glasgow now?

Glasgow is the setting the main character and the scene of fear from 1970s across the years.

Blimey this is not the Glasgow you would have wanted to visit. The nightclubs of the city are being stalked by a man known as Red Silk and several woman were murdered in a particularly gruesome way.

Elsewhere however this is a city built on nostalgia and flares, the era of the Thomas Crown Affair, T Rex and Chirpy Chirpy Cheep Cheep. It’s as if this book comes with a song list to fully immerse you in time and place.

There is even a club having a Be Red Silk night in the twisted hope that the killer might be attracted to attend. Fear is endemic and the city is scared –

“Glasgow seems to have become split into those who though everything was okay because Red Silk hadn’t struck for three weeks and those who were al the more terrified because he still hadn’t been caught.”

“They called it the City of the Dead. The Sprawling Gothic landscape that perched over Glasgow and contained the remains of fifty thousand lost souls. Now it held fifth thousand and one”

Glasgow’s Northern Necropolis, is the scene of the opening crime – a woman dead with the word ‘SIN’ scrawled across her body in red lipstick. Another body appears the next day.

Historic crime returning? Or is Atto simply playing a game of mental chess. the relationship or ‘ bond’ that he and Winter seem to share over images of death is creepy and disturbing. The streets of Glasgow blend with those of the past and the nightclub scene is still as vibrant as ever. It’s the cemeteries and scenes of death which dominate however as well as the gallows humour.

“It’s the Gorbals fucking Vampire all over again”

Gallows humour and a cemetery tour of Glasgow, an insight into the bowels of the city? I can honestly say this is a cracking read for the sheer realistic tone and portrayal of many of Glasgow’s sights and streets.

I’ve learned several new words since reading Craig Robertson and can say that this book is grim , yes but the gallows humour really made it stand out. Cemeteries are eerie places at the best of times but the dual time line story make them all the more so by linking past and present death.

The verdict?  A Gallus  read 😉