In Place of Death 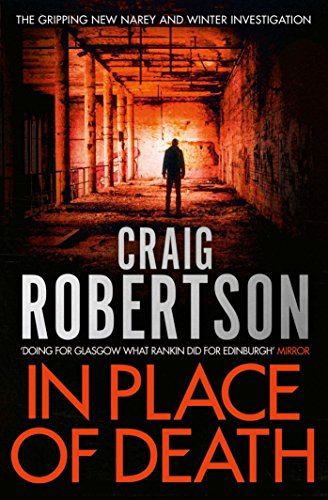 A young man enters the culverted remains of an ancient Glasgow stream, looking for thrills. Deep below the city, it is decaying and claustrophobic and gets more so with every step. As the ceiling lowers to no more than a couple of feet above the ground, the man finds his path blocked by another person. Someone with his throat cut.

As DS Rachel Narey leads the official investigation, photographer Tony Winter follows a lead of his own, through the shadowy world of urbexers, people who pursue a dangerous and illegal hobby, a world that Winter knows more about than he lets on. And it soon becomes clear that the murderer has killed before, and has no qualms about doing so again.

Urbexing is a concept that works particularly well in Glasgow – it’s  the name given to the method of investigating abandoned urban buildings or places in a city. You know the type – buildings left to go to wrack and ruin – and people curious enough to want to have a look around.  There’s no vandalism involved just the curiosity of seeing inside what used to be.

Now imagine that you find a dead body on one of your visits!? These buildings are already dark, foreboding places, scars on the city’s landscape some might say. They are claustrophobic and chilling places, anonymous and cold so a killer roaming around these parts is right at home.

This is a Glasgow full of abandonment, a  city of dark places, sinister and evil.

“The burn was here before Glasgow was” It was  used to mark the east end of the city and it powered the mills in the industrial revolution. Quite some history here it would seem.

The original Molendar Burn used to separate the cathedral from the cemetery and had the bridge of signs built above it so that corpses could be carted into the ceremony.

This book really does bring a new light onto Glasgow. There’s a really grim and unique edge to this – a raw gritty urban edge with the many abandoned buildings that seem to form part of many cities in the UK now. But in Glasgow they’re hiding something else and it’s a real chiller this one.

The action starts from the get go and never lets up. I am always amazed at how these crime writers who are so nice when  you meet them seem to be able to write this kind of plot. Kudos to Craig mind, as it got me squirming. The urbexing storyline was very unique and I felt as if I was really placed inside the heart of the action. I’d never heard of it and feel that there’s an awful lot to learn.

It gave me a really unique view of Glasgow and abandoned buildings and I felt the thrill of the chase after reading this. A classically good thriller.