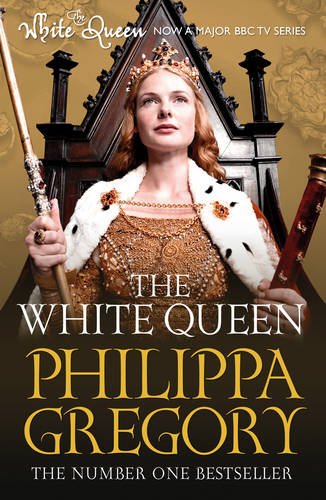 1460s: A fictional account of the families at the heart of the War of the Roses and the mystery of the missing princes…..

A family feud that turns deadly. One brother fights another to win the ultimate prize – the crown of the King of England and the most powerful position in the land.

At the centre of it all – the White Queen  – Elizabeth Woodville who catches the eye of the young king Edward. They fall in love and marry in secret but many are against such an important union. Richard, Edward’s brother is unhappy that he might see his claim to the throne make weaker as a result. So when Elizabeth gives birth to two young boys – the princes in the tower – it would seem his fate and that of the country is sealed.

It all started with a meeting  – not one of chance but one arranged by a woman in need from an ambitious family. Her husband having died at the Battle of St Albans, Elizabeth was in need of her son’s inheritance since her husband had been on the losing Lancastrian side. Pleading in front of the King was her best chance at saving her family’s future.

Their manor house  – Grafton House was close to Whittlewood Forest, a royal hunting ground. Knowing that Edward the King hunted there, Elizabeth ‘lay in wait’. Legend has it that the tree they meet under in the novel is the very real Queen’s Oak in Potterspury. The remains of the tree survive in a field just east of Potterspury Lodge off the A5.

The secret marriage occurred at Grafton Manor on May 1 1464. Edward had only been king for three short years and so he was expected to marry gentry.

They went on to have many many children but it was the sons Edward and Richard that proved to be the most controversial and significant for the country’s future.Richard III knew these boys were his obstacle into becomingKing.

Edward was supposedly captured by him or his forces in Stony Stratford, just 5 miles from their mother’s home at Grafton. Having declared Elizabeth’s and Edward’s marriage invalid, Elizabeth was forced to claim sanctuary in Westminster Abbey

The War of the Roses officially ended when Elizabeth allied herself with the Lancastrian cause in the form of Lady Margaret Beaufort, mother of a certain Henry Tudor  who won the the Battle of Bosworth in 1485, killing Richard III in the process.

The Princes were locked in the tower and were never seen again. Their fate remains a mystery to this day.