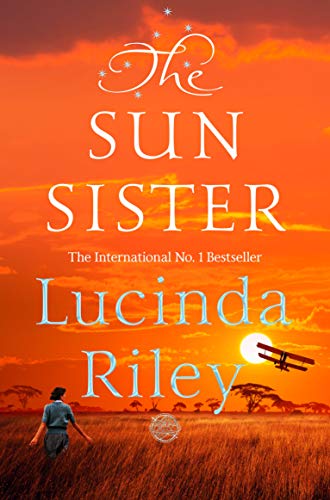 1930s, 1960s, 2008: Sweeping from Manhattan to the magnificent wide-open plains of Africa, the sixth in the Seven Sister series

To the outside world, Electra D’Aplièse seems to be the woman with everything: as one of the world’s top models, she is beautiful, rich and famous.

Yet beneath the veneer, Electra’s already tenuous control over her state of mind has been rocked by the death of her father, Pa Salt, the elusive billionaire who adopted his six daughters from across the globe. Struggling to cope, she turns to alcohol and drugs. As those around her fear for her health, Electra receives a letter from a complete stranger who claims to be her grandmother . . .

In 1939, Cecily Huntley-Morgan arrives in Kenya from New York to nurse a broken heart. Staying with her godmother, a member of the infamous Happy Valley set, on the shores of beautiful Lake Naivasha, she meets Bill Forsythe, a notorious bachelor and cattle farmer with close connections to the proud Maasai tribe. But after a shocking discovery and with war looming, Cecily has few options. Moving up into the Wanjohi Valley, she is isolated and alone. Until she meets a young woman in the woods and makes her a promise that will change the course of her life for ever.

Discover the wilds of Kenya with Electra’s story Seven Sisters

A sweeping novel of discovery which takes in the landscapes of Africa in all their stunning beauty. However the novel also looks at the harsh reality of the country when war was on the horizon and where apartheid and slavery were at their peak. This is a land of civil war, suspicion of the white arrivals, and a hierachy which depends on the shade of your skin. This is  a war-torn and divided country where racism is rife and when it rears its ugly head, the effects can be devastating:

“The place sounds totally uncivilized. Half -clothed natives running around, wild animals wandering into your garden….”

“…their notoriety worries me more than the lions.’ Dorothea answers bluntly. ‘They all sound a little darned racy from what I’ve read in the newspapers.

Kiki’s words had not done this landscape justice. The sun hung low in the still blue sky, casting a stream of golden light onto strange-looking trees with flat tops. The lawn of Mundai House curved gracefully down to the shoes of a vast lake, the water reflecting the tomes of the sky as colourful birds glided through the trees, The colours seemed more vivid than anything she had ever seen.

“It’s so beautiful, yet so brutal.”

Wow this is one of the strongest parts of the book. A mongoose is a great pet and area very good at killing vermin apparently. They’re great protectors as they’re impervious to snake venom.

“There’s a giraffe on the banks of the lake nibbling in the grass, guests in the house can hear a cacophony of tweets, calls and caws of unknown birds and animals.”

The Maasai tribe feature throughput and you learn a lot about their lifestyle and the fact that the cow is their sacred animal. They believe that all cows in Africa belong to them and so they have issues with landowners who  try to trade them. They have been known to drain blood from the cow and drink it, believing it will give them strength and well-being.

There’s one section in particularly where Cecily goes to see the lions and other animals and she learns the names the Maasai call the creatures. Insightful!

Well evoked but there is a line in the book that really tells you how it is:

“No amount of reading could prepare a person for the sheer- awe-inspiring scale of it in reality.”

This is perhaps the most serious and thought-provoking of the whole series so far. The author herself seems to think so given the author note at the end and the length and breadth of the bibliography. For reasons of spoilers, that’s all I’m going to say, but this novel does and will make you think.

The story takes us to Kenya and Electra’s link to the past. As you might expect with Lucinda, the locations come to life from the page. The tribes, the animals the settings are all painted with a lush paint brush.and they shine off the page. You can feel the heat, hear the animals and feel the breeze on your face as you sit with the characters in the grand house where she stays.

It’s not all stunning however. The author does not shy away from depicting the reality of living in a country where civil war, apartheid and persecution depending on what tribe you belong to, goes on. There’s political snippets, comments and discussions blended into the narrative which works well. And the Muthaiga club expats! Well that’s another world entirely.

I found the novel very thought-provoking and insightful but very sobering – and I use that word carefully and with loaded meaning.

And one more thing? The ending hits at something about the missing sister…the seventh sister…. Can’t wait for the last book! But then that means there’s no more Seven Sisters! What a conundrum!